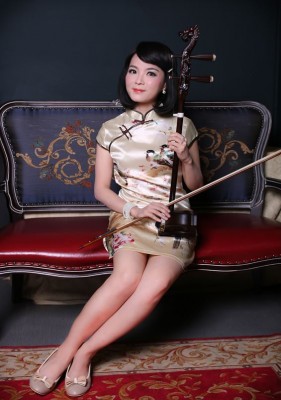 Winner of 2018 Na Hoku Hanohano awards, Ehru soloist Tsun-Hui Hung (洪充惠) studied the Chinese fiddle from the age of six, winning major performance awards, including the Outstanding Artist Award at the 2004 Taiwan National Erhu Competition. Her musical artistry led to invitations to perform at prestigious music venues and collaborate with composers and musicians from diverse musical backgrounds, including Western-classical, Chinese, and world music. She holds a PhD in Ethnomusicology from Ohio State University. A resident of Hawaii since 2016, she has also developed an interest in interpreting Hawaiian music on the erhu together with musicians on Oahu. In addition, she is proud of being the 2004 champion of the National Taiwan Taichi Competition.

Dr. Tsun-Hui Hung teaches music and Chinese language at Hawaii Pacific University, Hawaii Tokai College, and St. Andrew School. She has won the Taiwan erhu (Chinese violin) competition, first place, and was titled the champion of Taiwan Taichi competition. She has been performing internationally and is a raising star in Hawaii. Recently, she has been interested in Hawaiian-Chinese fusion music with many local musicians.