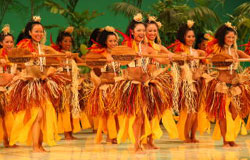 Tiare Heipua is an award winning Tahitian Dance Troupe from Ishikawa, Japan, directed by award winning individual soloist and group leader, Minako Heikapua Sabarsah. They have been awarded First Place at Heiva I Honolulu 2008 in the Hura Ava Tau Category in the Divisions of Overall Otea and Ahupurotu. They have also taken home First Place Awards at Heiva I Japan 2008 in Aparima, Otea, Tamari’I Otea, and Tupuna Divisions and Categories. This year Tiare Heipua has returned once again to Heiva I Honolulu 2009 to participate in all group categories. Today they will be presenting you with their Overall Otea Performance. Tiare Heipua URL:http://www14.ocn.ne.jp/~tiare/hula.htm Tahiti Nui International URL:http://www.tahitinuiinternational.com/