Home About Us Nagaoka Fireworks 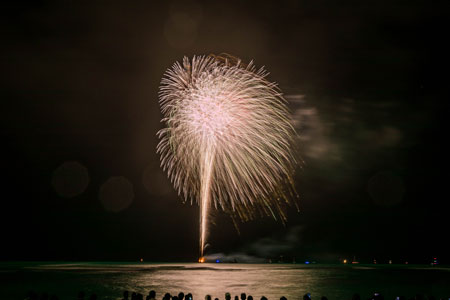 For the past seven years, the finale of the annual Honolulu Festival has been celebrated with the Nagaoka Fireworks. With the message for world peace, the beautiful fireworks bloom in the night sky over Waikiki Beach.
This article uncovers the reason why the fireworks from the city of Nagaoka, Niigata came to Honolulu, and the underlying historical connection between the two cities.

History of the Nagaoka Fireworks

The fireworks festival in Nagaoka City started during the Meiji period, and it was beloved by the public for 59 years until it was cancelled in 1938 due to the World War II . On August 1, 1945, Nagaoka was attacked by a sudden nighttime airstrike which claimed the lives of 1,486 civilians and completely devastated the city. In the following year, Nagaoka held the War-damage Restoration Festival on the day the bombing happened as a memorial service for the victims, and with a hope for the recovery and development of the city. In 1947, the fireworks made their comeback in order to cheer up the people of Nagaoka. The Restoration Festival, which was since renamed Nagaoka Festival, evolved to become an annual event that commemorates the war victims and expresses a prayer for the peace and prosperity.

At the US-Japan Conference of Mayors that took place in August 2007 , Tamio Mori, (then) Mayor of Nagaoka, introduced the connection between Honolulu and Nagaoka during the Pacific War to (then) Honolulu Mayor Mufi Hannemann. Isoroku Yamamoto, who was in charge of the attack on Pearl Harbor, was born in Nagaoka. He studied and was stationed in the United States several times, where he witnessed the insurmountable gap of resources and power between the US and Japan. Yamamoto became convinced that fighting against the US would be reckless, and began seeking ways to avoid a US-Japan war. When he was promoted to the commander-in-chief of the Combined Fleet in 1939, he planned and directed the attack on Pearl Harbor as a tactic to start a peace negotiation with the US and end the conflict as soon as possible. The attack caused the casualty of 2,390 people, and contrary to Yamamoto’s intention, the fact that it was a “sneak attack” swayed the public opinion in the US to declare the war against Japan. The resulting Pacific War turned out to be a protracted conflict that led to Japan’s commitment to the total war. The bombing of Nagaoka mentioned earlier took place shortly before Japan eventually announced the intention to surrender.

There is no denying that Honolulu and Nagaoka were once enemies; Honolulu suffered the attack on Pearl Harbor by the Japanese Navy without warning, and Nagaoka is the hometown of Isoroku Yamamoto, who directed the attack, and fell victim to the bombing by the US army. It is significant, therefore, for the two cities to reconcile and interact with each other. In order to promote the friendship between the US and Japan and contribute to world peace, Honolulu and Nagaoka became sister cities in 2012. In the same year, Nagaoka Fireworks were launched on the last day of the Honolulu Festival for the first time. And in 2015, a memorial ceremony was held at Pearl Harbor to commemorate the 70th anniversary of the end of World War II. Three white Nagaoka Fireworks shot up into the sky with a hope for the peace, followed by the total of 2,000 fireworks that lit up the night of Pearl Harbor. 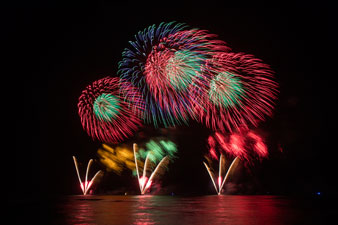 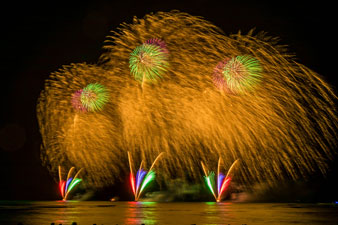 Honolulu Festival concludes with the Grand Parade. And grand, it is. The parade starts at Saratoga Road and co[…]

Throughout the Honolulu Festival, you can enjoy various cultural performances at three different locations: Ha[…]

Got questions? The Honolulu Festival Foundation is committed to making the Festival an educational opportunity[…]

Enjoy our Craft Fair with over 100 booths from Japan, Hawaii and other Pacific countries. Craft Fair is a grea[…]

The Friendship Gala is an exciting event featuring wonderful cuisine and cultural performances. The purpose of[…]

For the past seven years, the finale of the annual Honolulu Festival has been celebrated with the Nagaoka Fire[…]