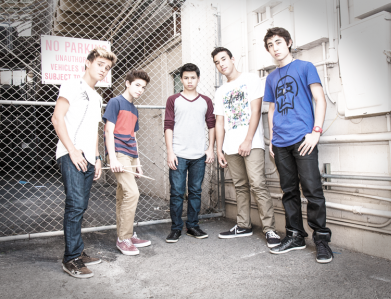 The Wreck is a Honolulu based alternative/indie/pop/rock band made up of five young rockers; Ian Wacksman (12) on drums, Nick Marabella (14) on bass, Josh Kay (14) on keyboards & backing vocals, Dylan Wacksman (15) on guitar & backing vocals, and Gino Romano (15) lead vocals & guitar. Their goal as a band is simple, to improve as musicians and to entertain people. While they may seem young, these guys can really rock! With a monthly gig at Hard Rock Café Honolulu as well as a number of festivals and non-profit events, The Wreck is quickly becoming the Honolulu band to see. Their music includes both originals, as well as covers from bands like Maroon 5, The Beatles, Bruno Mars, Stevie Wonder and many more.