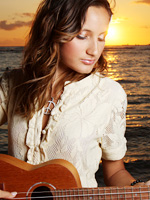 Taimane Gardner was born on February 13th 1989 in Honolulu Hawaii and was performing by the time she could walk. She is known as a talented beautiful Ukulele player.
One influential ukulele teacher she met at the age of 11 was Jake Shimabukuro, the young and upcoming superstar of modern ukulele. Jake’s fast and electric guitar style rekindled Taimane’s passion of speed and she quickly learned many of his skills.

She has been to Las Vegas, New York and New Jersey to share her attractive performance. Even in Japan she has become famous after the first TV appearance. She released the first album “Loco Princess” in 2005.