The Newsletter for the Honolulu Festival in 2019 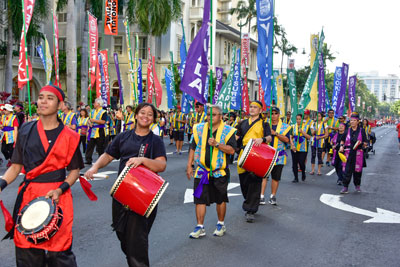 Would you like to be a part of the Honolulu Festival? Our application form for vendors and performers is now available below. For Japanese inquiries, please click here＞＞ ■Performers (Stage Performance/Grand Parade) Stage Performance The Stage Performance will be held at various places in Honolulu including the Hawaii Convention and Ala Moana Center and Waikiki area. This is an event which you can interact and enjoy dancing with the performers on and off the stage.   Grand Parade The Hawaii’s greatest parade will be held on Kalakaua Avenue in Waikiki, where various performances will be presented for about 3 hours. This is the final event of the Honolulu Festival which will reach its climax. Performer’s application form for the Stage Performance and Grand Parade is available below. ≫Application Form (in English) ≫Contact (in Japanese)   ■Vendor Booth The Craft Fair is a place where various cultural exhibitions and demonstrations will take place at the Hawaii Convention Center. There will be over 100 vendor booths that are available. This is an event that offers cultural exchange through many arts and cultures which goes beyond the language barrier. Vendor’s application form is available below. ≫Application Form (in English) ≫Contact (in Japanese) We are waiting for your application. Related Article: Three major reasons to participate in the Honolulu Festival The Japan Tourism Award contributes to the development and expansion of tourism, to the synergy effect along with Tourism EXPO Japan, and recognizes sustainable and excellent efforts of domestic and overseas groups, organizations and companies, by notifying society of the award-winning efforts, they aim to promote understanding of tourism and contribute to further development of tourism as a whole. In August 2018, the Honolulu Festival awarded the Excellence Award, following the grand prize. The reason for receiving the award is being continuously implemented for about a quarter of a century as a symbolic event of exchange between Japan and Hawaii, and the program has evolved constantly beyond the enterprise’s business barriers, fully established in the local community. GIVE and Join the private VIP viewing function! 25 minutes of fireworks for 25 years of Aloha, the longest fireworks show ever in history of Honolulu Festival. Click here to see more information »

The 25th Annual Honolulu Festival Sub-theme has been determined! We just released 24th Honolulu Festival’s highlight video. we received many positive feedbacks from people in Honolulu and outside the city. As we run Honolulu Festival Foundation, we set 3 important themes: “cultural exchange”, “education”, and “environment”. We are planning more interesting events for the next 25th Honolulu Festival in 2019. We look forward very much to seeing you at festival. Click here for Youtube Clip＞＞ The Honolulu Festival Foundation conducts an educational program that sends Hawaiian high school students to Japan every year. As a result of the presentation selection in 2018, we sent four students and one teacher from Hilo High School to Nagaoka City in Niigata Prefecture in Japan from February 15th to 19th. During their stay in Japan, they experienced many cultural exchanges through communication with local students, the homestay and by joining the Yukishika festival. Also, they played in the snow and appeared in a radio program. The tour of the Yamamoto Isoroku Memorial Hall and the War Museum deepened their understanding of peace. They had a thoroughly filled training program. One student from Hilo High School said that they could feel the hearts of Nagaoka’s minds and the feelings of the city praying for world peace and that it had been a good opportunity to think about how they can contribute to world peace as individuals with the students of Nagaoka. The program to send high school students in Hawaii for educational training to Japan started in 2013 as a sister city partnership between Honolulu City and Nagaoka City in 2012. The Honolulu Festival Foundation and Department of Education in Hawaii cooperate together to select a representative school through their annual presentation. We have been sending over many students from Iolani High School, King Kekaulike High School, Kalani High School, Maui High School and Kaiser High School to Japan. Honolulu Festival Foundation will continue to help support and contribute to Hawaii’s youth education. Interaction with local students Nagaoka fireworks   Welcome display Local radio program Sister city event

We are announcing the schedule for stage performances, which will be held for 2 days on March 11 and 12 at Ala Moana Center, Waikiki Beach Walk and Hawaii Convention Center! Click Here for the Details>>> *All events may be subject to change without further notice.

We are announcing the schedule for grand parade, which will be held on March 11 at Kalakaua Avenue! Click Here for the Details>>> *All may be subject to change without further notice.

The Craft Fair will be held at the Hawaii Convention Center on March 10 and March 11. Click Here for the Details>>>   *All events may be subject to change without further notice.