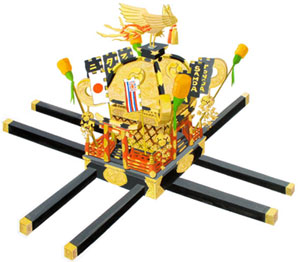 Kamehameha Schools Maui won the 4th Annual Maui Mikoshi Design Contest for the 2nd time since Mr. Kealii Mossman and his students won the first contest back in 2004. The Maui Mikoshi was designed under the theme of this year’s Honolulu Festival which was “Pacific Renaissance”.

A total of 33 members including students, guardians and teachers were offered a round trip ticket and hotel vouchers to attend the 13th Annual Honolulu Festival, which will be held from March 10 through March 12. Also, they will be participating in the Grand Parade, where they will be carrying their Maui Mikoshi in Waikiki on Sunday, March 11.

Theme of the Design
By: Mr. Kealii Mossman and his students from Kamehameha Schools Maui 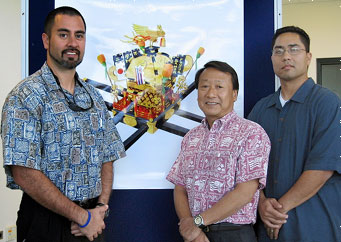 This year’s Maui Mikoshi was designed under the theme of the 13th Annual Honolulu Festival, “Pacific Renaissance”. Its design expresses various countries around the Pacific Rim.

The decoration on the Maui Mikoshi seems simple yet it includes the powerful cultural factors of Hawaii and Japan. We are paying respect to various Pacific Rim countries through the theme of this year’s festival.

There is a golden kāhili on each corner of our mikoshi. A kāhili is a pole made out of bird fathers from the Kindom of Hawai’i which symbolizes the royal family. We used it to express the islands of Maui Nui including Maui, Moloka’i, Lānaʻi and Kaho’olawe. Also, the banners are standing in front and back of our mikoshi. The names of the countries of the Asia-Pacific region are written in English and Japanese on each side of those banners using black and gold colors. In addition, the national banners of Hawaii and Japan are standing in the front side. They don’t contain any words but instead, they are symbolizing both countries.