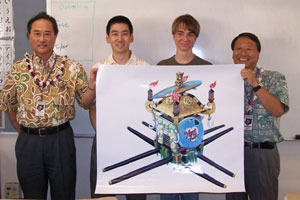 The team Henry Perrine Baldwin High School led by Mr. Rory Sato won the Maui Design Contest for the second time since 6 years ago. This contest started as a social service, where it provides an opportunity to interact and learn about the Japanese culture for the youth in Maui since 2004.

We had an opportunity to speak to Mr. Sato, who teaches the Japanese language at Henry Perrine Baldwin High School. We asked him about the designing of their mikoshi.

“First, I asked everybody to ponder on the sub-theme of the Honolulu Festival which was “Heart of the Pacific, Creating our Future” and then come up with their own idea for the design. In the following week the students were divided into groups and everyone presented their idea, which each of the group picked the best concept. Then, those selected ideas from each of the group were introduced up on the school bulletin board, where the students were asked to vote. The most popular idea became the foundation for the design which various factors were adopted as well. Also, the students who are good at designing finalized the design that represents Henry Perrine Baldwin High School. Their design consisted of hula, lei, Tiki sculpture, canoe and surfing which represent the traditions of Hawaiian culture.”

In addition, protecting the marine life such as fishes, whales and dolphin as well as the environment of nature and Pacific Ocean were the important factors of their design. “Heart of the Pacific” was written on the mikoshi. 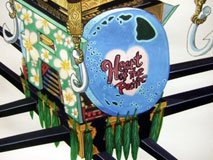 The picture drawn by the student became the design for the poster.

Furthermore, he students from Japanese language class showed interest in a Japanese custom such as Japanese housing, bento box, handkerchief and rules of Japanese schools. Also they were interested in Japanese culture such as foods, legacies, oral traditions, Japanese comedies and origin of the Kanji letters.

According to Mr. Sato, the students of Henry Perrine Baldwin High School are very looking forward to participate at the Honolulu Festival.

“The Honolulu Festival provides the best opportunity to interact wit the Japanese culture in Hawaii. The students can observe various exhibitions and performances to learn about the culture. In addition, they have a wonderful opportunity to interact with others who are also interested in the Japanese language as well as the Japanese culture. Moreover, the students will be carrying their own mikoshi, which they may feel a sense of accomplishment through their hard work. We would like to acquire knowledge of various cultures through watching the stage performances by the groups from the countries of Pacific Rim including Japan. Also, we would like to enjoy a variety of Japanese foods and arts. In addition, we are very excited to participate in a parade.”

The winning Maui Mikoshi will be displayed on the weekend during the Honolulu Festival at the Hawaii Convention Center. A total of 29 students from Henry Perrine Baldwin High School will be visiting to Waikiki with Mr. Sato for the Honolulu Festival. Please visit to see their dedicated work and please cheer for the students. The Maui Mikoshi designed by students from Baldwin High School They are the students from Baldwin High School

Hawaii Superferry has generously donated round trip transportation for the Baldwin High School’s students and teachers. Thank you very much for your support!
Back to TOP