Once again Maui High School won the 8th Annual Maui Mikoshi Design Contest. The participating students were different from last year, which they studied the history of mikoshi and learned about Japanese culture. There were a total of 18 students that are learning about Japan as well as the Japanese language at Maui High School.

Furthermore, the mikoshi designed by the students expressed a hope for world peace with the sub-theme of this year’s festival “We are all neighbors, around the world”.

The Concept of Design

There is a dove on the very top which symbolizing “peace” and “harmony”. Also, there is a dove positioned on each side of the roof which is carrying two different flags. Moreover, there was an illustration of earth which the lands and sea were designed. In addition, there were name of countries and their capitals decorated on the four corner of the roof.

The Kanji letter that symbolizes “family” (族) is designed as an emblem on the center of the roof. Furthermore, there were designs of shining rising sun, cherry blossom and carp at the front and back of the body, which they symbolizing Japan. In contrast, there were Hawaiian designs such as moon, hibiscus and Hawaii state fish Humuhumunukunukuapua’a were drawn on the left and right side of the mikoshi. In addition, there was an illustration of fishing net and people by the pedestal in which they symbolizing human unity. Finally, our sub-theme “We are all neighbors, around the world” was put up on the pillar. 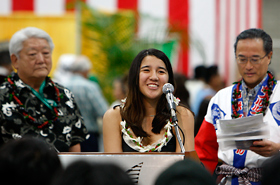 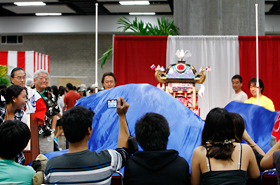 Interview with Etsuko Nagahama, a teacher from Maui High School