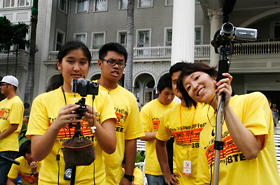 The “Share Your Voice Project” is an educational program between the Honolulu Festival Foundation and students of Kapiolani Community College. Its purpose is for the students to report on the attractiveness of the Honolulu Festival through their own experience to the world by utilizing live stream technology.

There were 38 students that participated this year. The scenes of the festival were live-streamed from 2 different locations unlike last year, which was done only from one location. In addition, the students utilized the social media such as Facebook and Twitter to introduce the atmosphere of the festival in Japanese, English and Korean.