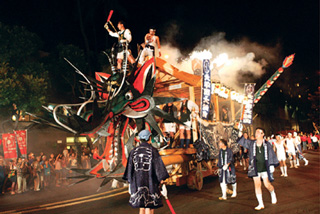 The fire spitting dragon called Daijayama will be coming from Fukuoka Prefecture in Kyushu, Japan to the Honolulu Festival. The Daijayama Summer Festival celebrates the legend of the Daijayama which dates back over a thousand years attracting over 400,000 people. The Daijayama’s cart will be leaded by lots of people and parading around the streets of Fukuoka Prefecture in July of every year. According to the folktale, Daijayama is a water god that blesses farmlands with water and protects children’s health.

The large Daijayama’s cart measuring 20 feet in height and 33 feet in length will be featured in the Grand Parade. It will be led by over 75 people with dancers and accompaniment of gong. Also, the fireworks firing from Daijayama brighten up the night sky of Waikiki. This is a must-see performance which is filled with energy and excitement.

The Honolulu Festival has been promoting goodwill and cultural exchange for the past 14 years. Once again this mission will be tested during the appearance of the Honolulu Daijyama in the Grand Parade. There were approximately 25 volunteers from Kyushu, Japan and over 50 volunteers from the Hawaii Fukuoka Kenjinkai ( the association consisting over 120 members whose descendants are originally from Fukuoka Prefecture) including the volunteers from the Japanese Culture Club at the University of Hawaii. This project was led by Mr. Richard Yasukouchi, who is an active member of the Hawaii Fukuoka Kenjinkai since 2004. We had an opportunity to interview him.

Practicing Scene [before the parade]

His father was also the member of the Hawaii Fukuoka Kenjinkai in the Big Island for over 50 years. However, Mr. Yasukouchi didn’t know about it until he visited the meeting hosted by the Hawaii Fukuoka Kenjinkai in which he was invited by his cousin in 2004. His first encounter with Daijayama was when he was called for assistance by the Honolulu Festival in assembling the head of a blazing dragon on March of 2004. Also, he learned how to play a gong and taiko drum during the rehearsal for the Grand Parade.

Mr. Yasukouchi was very impressed with the ideas of preserving the Honoluu Daijayama as a tradition of the Honolulu Festival and hosting a festival with volunteers in Hawaii. He was assigned as a leader when the Hawaii Fukuoka Kenjinkai got involved in this great project. This year the volunteers in Hawaii will take a major role in the Grand Parade for the first time. The Daijayama’s cart will be led by the volunteers from the local communities including the Hawaii Fukuoka Kenjinkai, Japanese Culture Club at the University of Hawaii and President Theodore Roosevelt High School.

The Grand Parade is near. The volunteers gathered up to assemble the Daijayama’s cart

When Mr. Yasukouchi was asked what the biggest concern is, he replied:

“Our main concern is the safety of spectators. The Daijayama’s cart weighs about 1.5 tons which will be pulled by the 30 volunteers from the front side. The wooden blocks will be used for brakes and this is done manually. Also, over 20 volunteers were assigned as a musical accompaniment which they will be riding on the cart. And then the fireworks will be launched from the roof. The firefighters from the Honolulu Fire Department will be responsible for the safety of the performers and spectators.”

The mission for Mr. Yasukouchi is letting the members of the Junior Fukuoka Kenjinkai (age between 35-55) be the main performers of the Honolulu Daijayama to preserve its tradition. The Honolulu Festival Foundation wishes for his success as well as the success of the group.

Please come to the Grand Parade on Sunday, March 16 and support the Honolulu Daijayama on Kalakaua Avenue.

The Honolulu Daijayama spitted fire (fireworks) during the Grand Parade which was full of excitement. 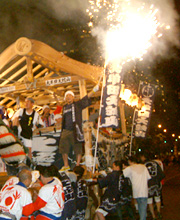