There was a lot of local media at the 14th Annual Honolulu Festival. Due to their support, thousands of visitors came to the festival from March 14 through March 16. The Honolulu Festival Foundation is very grateful for the support given by the local broadcast, radio and newspaper.

The most frequent questions we’ve received from the local media were “What is the purpose of this festival?” and “What is the importance of this annual event?” The theme for this year’s Honolulu Festival was “Pacific Harmony”. We believe that it is important to promote cultural understanding and ethnic harmony through cultural exchange between people of Hawaii and the Asia-Pacific region. Also, we are hoping that the children of Hawaii can experience various cultures and apply their knowledge outside of Hawaii. In addition, whether you are from Japan, Korea, China, Philippines or others, we believe that it is important to explore your ancestral culture and find various information on it regardless of country. 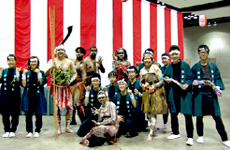 The Honolulu Festival began to serve as a bridge for cultural exchange between Hawaii and Japan. It is now developed as a multi-cultural event, where you can get to watch various performances of traditional and modern cultures of the Asia-Pacific region including Australia, Tahiti, Philippines and Korea.

One of the attractive parts of the festival is that the performers from various countries will be gathering in Honolulu, where the visitors can watch and experience different cultures for 3 days. You can’t witness many cultures in one spot, even if you went to other festivals in foreign countries.

Another unique feature of the festival is that there are lots of cultures that you can experience. For instance, there are many participating groups that perform traditional Japanese culture, yet there was also Haruko Momoi, who is an anime voice actress in Japan. She will be presenting the culture of Akiba on stage.

Also, Tonosama Ren from Tokushima Prefecture will be performing Awa-Odori and Manoa DNA will be presenting contemporary Hawaiian music. In addition, the mascot of Beijing 2008 Summer Olympics will be coming to the festival. This is an event where you can watch and experience lots of cultures such as the Japanese tea ceremony and Australian Aboriginal dance at the same time.

Furthermore, the Ennichi Corner was held for the first time at the Hawaii Convention Center. The children experienced the Japanese summer festival in Hawaii, where there are many Japanese and Japanese Americans. They played various Ennichi games such as goldfish scooping, quoits and yo-yo fishing.

Also, the Honolulu Festival was featured on many newspaper articles including the Nishinippon Shimbun, Chunichi Shimbun and Mutsushimpo.

The Honolulu Festival Foundation is very grateful for all the support given through television, radio and newspapers. Please continue to support us next year as well and please look forward to the 15th Annual Honolulu Festival!