The Ennichi Corner in the children’s paradise called Hawaii! 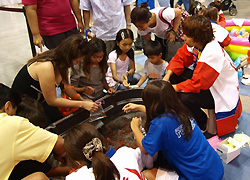 The Ennichi Corner was held for the first time at the Hawaii Convention Center. The celebration of Ennichi is crucial in the Japanese festival. There were some Japanese games which the Japanese who lives in Hawaii may feel a sense of nostalgia. They included quoits, Kamishibai (Picture Card Theater), origami (paper-folding), shooting gallery, yo-yo fishing and goldfish scooping. There were prizes such as cotton candy and face painting for those displayed games. The children were into them which the poi catcher used in the goldfish scooping quickly run out of stock. 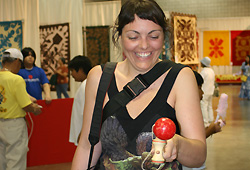 The Japanese children who were born in Hawaii were curious of Japanese Kamishibai which can be seen in Japan. The parents that came with their children were pleased that they can experience traditional Japanese games in which are rare in Hawaii. Also, the local children as well as the tourists raised their curiosity after seeing the Japanese toys that they’ve never seen before.

The adults were participating in playing games along with the children. Ms. Taranova who is a tourist from Canada and also likes to play games challenged kendama for the first time. She tried it over and over again, which she became successful in catching the ball at last. Also, she was enjoying with full of smile and said “Everybody that is here is smiling and warm which I felt very at home.” It may be true that the Ennichi can make you feel nostalgic about your childhood even if you’re not Japanese. We are planning to bring in more games and toys from Japan next year as well!