The Grand Parade was held for the finale on Kalakaua Avenue in Waikiki on the final day of the Honolulu Festival on Sunday, March 16.

The participating groups were gathered by the starting point at Fort DeRussy Beach Park, which they looked anticipated and nervous at the same time. Also, there were spectators that were looking for a best spot to watch the parade, which the roadside of Kalakaua Avenue was filled with lots of spectators before the starting. They were smiling and cheering with excitement as the parade began.

The first appearance was the U.S. Fleet Band. Some of the spectators quickly stood up, took their hats and welcomed the band when they saw the American and U.S. Navy flags, which showed strong U.S. patriotism.

And next appeared was Mufi Hanneman, who is the Mayor of Honolulu. He was with a convertible but he was walking instead of riding on it. His friendliness may be the secret of his popularity. Some of the spectators were yelling “Mufi!” from the roadside. 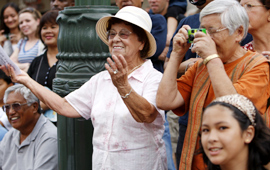 Furthermore, Cherry Blossom Princess, Narcissus Queen and the Honolulu Sister City Goodwill Delegation from Hiroshima made the appearance. The mascot character for the Beijing 2008 Summer Olympics appeared as well.

Also, the 4 local groups of Chinese lion dance participated for the first time which the long Chinese dragon came to support them as well. One after another, the dancer who is controlling the lion gets shifted. There were times when the lion showed a drastic movement but suddenly, the dancer was switched from an adult to a small child. Then, the lion started to walk with unsteady steps which their performance brought an excitement.

Moreover, the members of the Hawaii United Okinawa Association made the appearance and performed eisa (Okinawan folk dance) in a large group. In addition, the Hawaii United Okinawa Association was established in 1951.We felt that their performance is keep getting power every year. Also Kapolei High School Marching Band seemed to be receiving a louder applause than the other groups, since they are the locals from Oahu.

Also, there were many hula halau from Japan this year. Hano Hano Hula from Oita is a group that is also involved in volunteering activities, which their members visited a nursing home in Kuakini while they stayed in Honolulu.

The local elders were impressed by the cheerful and vibrant dancing performances by Sonoda Gakuen High School and Tokyo Jitsugyo High School Phoenix Regiment. They were excited in which some of them went to give a hug to the dancers.

Mufi Hanneman, the Mayor of Honolulu takes the lead.

They are the winners of the 55th Cherry Blossom Festival which is an annual beauty pageant for young women of Japanese ancestry.

The character mascot “Fuwa” for the Beijing 2008 Summer Olympics.

The unique Chinese lion dance switches between an adult dancer to a child dancer.

Kapolei High School Marching Band was welcomed by the locals with a warm applause.

They are the members of Hano Hano Hula from Oita. Thank you for the wonderful smiles.

The members of Senryu Sorya Odorikai paraded the streets while playing the naruko instrument.

Ritsumeikan University dig up treasure from Osaka showed such a cool performance.

Japan 3B Gymnastics Association from Tokyo. The members were performing in a large group but they were also dancing in unison which was impressive.

The spectators along the roadside, where there were lots of smiles.

The students of Takaoka Ryukoku High School from Tomiyama were full of energy.

Zendoji Yamabiko Daiko from Fukuoka. The members showed such a powerful and youthful taiko drumming performance.

The members of the Toba-City Tourist Association brightened up the mood with their loud shouts in a red happi.

The members of Tonosama Ren participated for the second time. Their rhythm of Awa-Odori is universal which makes you want to dance.

Finally, the mikoshi appeared on the scene with the loud shouts of “Wasshoi! Wasshoi!” and the parade reached its climax. Both the performers and the spectators were excited. They were enjoying the performance of the mikoshi even when it was near to collapse, which was carried along with the shouts. 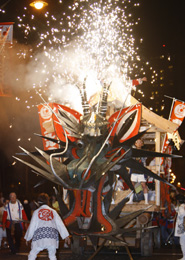 There were various mikoshi at the Grand Parade. Yumoto Suikyo Association from Kanagawa carried their “Inaho Adult Mikoshi” and the children carried their “Inaho Children Mikoshi”. The “Pineapple Mikoshi” was also present which has a shape of a Hawaiian pineapple. In addition, there was Hilton’s Sumotori Mikoshi owned by Hilton Hawaiian Village. Moreover, the Maui Mikoshi designed by the students of Kamehamehame Schools Maui which won the Honolulu Festival’s Maui Mikoshi Design Contest was also carried by them.

Last but not least, the Honolulu Daijayama appeared for the finale which was spitting fire. You can tell its powerful presence from a long distance away. Also, it moved forward in the darkness with a sound of bell which surprised the spectators that saw for the first time.

Those finished performers were relaxing at Kapiolani Park, where it is the ending point of the parade. Some got emotional by the fact that they were able to do their best and received cheered from the spectators, which there were performers that cried.

Also, it rained a little in the middle of the parade, but the weather quickly subsided. The Grand Paraded ended with a clear sky.

Hirosaki Neputa is a Japanese festival from Aomori, Japan. It’s like a dream to be able to watch it in the tropical island of Hawaii.

The Pineapple Mikoshi appears every year. There was an incident where it almost collapsed.

The adults of Yumoto Sikyo Association carried the Inaho Adult Mikoshi which their loud shouts echoed vividly on the streets.

The students of Kamehameha Schools Maui came from Maui to carry their Maui Mikoshi.

Hilton’s Sumotori Mikoshi with a huge sumo wrestler and referee is worth seeing.

The performers gave their refreshing smiles after when they were done carrying the mikoshi. You can sense their satisfaction from them.

The Honolulu Festival’s volunteers are also supporting to lead the Honolulu Daijayama.

The Honolulu Daijayama looks like its alive with spitting fire which may intrigue you.

The loud sound of bell was ringing from the Honolulu Daijayama.