The Hawaiian Quilt Exhibition was held at the Hawaii Convention Center for 2 days on Saturday, March 15 and Sunday, March 16. It was hosted by Poakalani & Co., which is a company owned by John Serrao, who is also Hawaiian quilter. There were various Hawaiian quilts displayed inside the venue. At the same time, the workshop and hands-on activity for designing quilt patterns were set up as well. 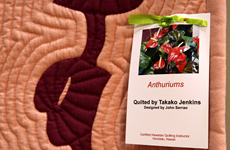 A total of over 60 Hawaiian quilts were exhibited. They were created by the students of Poakalani & Co. and pupils of Mr. Serrao. Also, we were able to see the works from not only Hawaii, but also from Niigata Prefecture, Tokyo and Canada. Most of the Hawaiian quilts were large in size. Even the small size was at least about 1 meter long which was worth seeing. Also, the patterns were stitched onto a plain fabric in a careful and detailed manner, so that you can recognize the design from a far instance.

The traditional patterns are often used for designing Hawaiian quilts. However, the ones that were displayed were all original. For instance, each flower motif consisted of different shapes and expressions. We were very amazed by their rich originality. 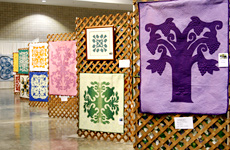 Did you know that there is a meaning and message behind the design of every Hawaiian quilt?  If you take a close look at each of them, you will start to realize that it represents Hawaiian traditional culture and arts in a profound way.There were students of Poakalani & Co. that created those Hawaiian quilts that were displayed, which they had an opportunity to share the story and message behind their own work. Those stories were very fascinating which reminded us that the Hawaiian quilt is not just a simple piece of fabric that is beautifully stitched together, but rather it carries a strong message in each design.  We were able to witness the genuine Hawaiian quilts in the Honolulu Festival’s Hawaiian Quilts Exhibition.

The Hawaiian quilt designed by Gordon Chun. Its theme was a taro plant which was created with freehand techniques.

These Hawaiian quilts consisted of red and yellow, representing the color of Hawaii’s royal family. 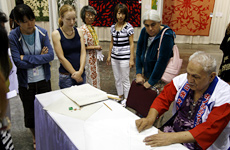 The Hawaiian Quilt Workshop was also held, where there was wide range of participants from beginners to experienced instructors. It was hosted by Mr. Serrao which is popular among his pupils as well as among the instructors of Hawaiian quilt to enhance their quilting skill. Then, they will start designing once their theme was decided by sketching onto a folded paper and checking the overall design with a big mirror. The participants were sketching and erasing over and over as they were checking by reflecting their sketches in a mirror. Of course the final check will be done by Mr. Serrao. In addition, if he sees any errors, he will be revising them accordingly. Every touch of his hands was educational.

Mr. Serrao will be kindly answering for any questions with his clear explanation.

The participant is brainstorming by looking through photos.

The design will be checked with a mirror.

Normally, many of Hawaiian quilting workshops are using the Hawaiian quilts that are already prepared for the pattern to be stitched, but this time the participants started from tracing on a folded paper and cutting a piece of fabric accordingly to their pattern. It looked very difficult when the participants were meticulously cutting a fabric with scissors. However, this made them feel strongly about creating their original Hawaiian quilt in which they sketched and stitched in a careful manner.

Ms. Cissy Serrao, who is the daughter of Mr. John Serrrao and also an instructor of Hawaiian quilting.

The pattern will be attached onto a fabric before cutting it.

The participant is carefully cutting outer side of the line. 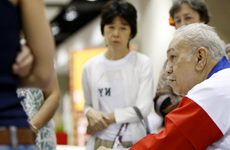 Mr. John Serrao is from a Hawaiian family tracing its lineage back to royal ancestry. He is currently offering his Hawaiian quilting class at the Iolani Palace. Formerly, he was conducting his workshop at the Royal Hawaiian Center (former Royal Hawaiian Shopping Center) in Waikiki.

Mr. Serrao has developed many of his new original designs by studying the traditional quilt patterns that the Serrao Family has preserved.

Also, he is rejoicing that he is able to preserve the Hawaiian quilting and to share this traditional Hawaiian culture with many people from outside of Hawaii in a proper form.

Recently, he appeared on the Japanese TV show and also participated at the Tokyo International Great Quilt Festival in Japan.

Mr. Serrao’s frank and friendly personality always attracts many people. We are looking forward to seeing him again at next year’s 15th Annual Honolulu Festival.