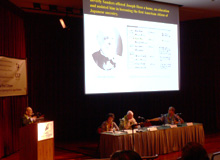 The U.S.-Japan Cultural Exchange Seminar was held for the 5th time this year at the Hawaii Convention Center which the topic was on Joseph Heco. Perhaps his name may be unfamiliar, but he was the first Japanese person to be naturalized as a U.S. citizen 150 years ago during the Bakumatsu period. 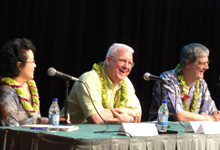 During the same period, John Mannjiro (who was one of the first Japanese people to visit the U.S.) was rescused by the American whaler ship when his boat was wrecked in the sea near Japan. 10 years later, he returned to Japan where he was promoted by the shogunate government. Henceforth he continued to emphasize the importance of the U.S.-Japan relations from Japan’s perspective. On the other hand, Heco was baptized in Baltimore and obtained his U.S. citizenship. He was working for the U.S. Embassy in Yokohama after his return to Japan. They both experienced castaways and lived a checkered life. Also, they served for the U.S.-Japan relations which they led a similar life.

There were researchers and descendants of Joseph Heco at this year’s seminar, where we were able to learn about the beginning of the U.S.-Japan relations through the life of Heco. 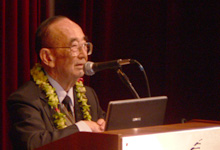 What caught the attention was Dr. George Mercer Brooke, Jr., who is a great-grandson of George Mercer Brooke, whom he served as the U.S. Navy Captain that supported Heco back to Japan. The Captain Brooke is also known for sailing back to the U.S. by the Japanese warship “Kanrin Maru”, which is a ship that he sailed to San Francisco with Kaishu Katsu, Yukichi Fukuzawa and John Manjiro.

Hawaii is located in the middle of the Pacific Ocean, where there are many historical places that are crucial to the U.S.-Japan relations. We will be planning for the next year’s U.S.-Japan Cultural Exchange Seminar as well.

The Exhibition of Joseph Heco and Kamishibai 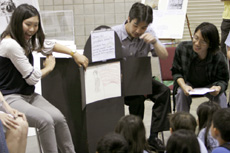 The exhibition of Joseph Heco was held on the 1st floor of the Hawaii Convention Center. The students of Kapiolani Community College (KCC) presented the life of Joseph Heco through Kamishibai (Story Card Theater) at the venue, where many panels were been displayed. Every slide of Kamishibai was handmade which its content was easy for both children and adults to understand.

Mrs. Linda Fujikawa, who is teaching at KCC stated, “It is very important for students to spread their knowledge to others. By applying and sharing their knowledge that the students learned in class, they can also increase their confidence.”

The members of the Joseph Heco Society of Hawaii were very pleased that the students of KCC made Kamishibai, which was presented for the children in a clear and detailed manner. This Kamishibai will be utilized again to tell the story of Heco in the future as well.

The guests were reading the panels by the exhibition of Joseph Heco.

The students of KCC drew a picture on each pieces of paper to create Kamishibai on the life of Joseph Heco.

A member of the Joseph Heco Society of Hawaii gave a word of gratitude to the students.

Lei Sato, a student at Kapiolani Community College
I learned about Joseph Heco through this year’s Honolulu Festival, who was a man that I never heard of in Japan. Also, we presented his life through Kamishibai which is one of the cultures of Japan. But nowadays, it is rare to witness Kamishibai even in Japan, so in the beginning, we had to do our research on what it is. Also, we summarized the main points on the life of Joseph Heco. Then, we drew picture of them by hands on each pieces of paper, so that it makes it easier for children to understand.Joseph Heco lost his parents when he was little. In addition, his boat was wrecked during sailing with his stepfather which they got lost in the Pacific Ocean for 2 months. However, the life of Heco had changed drastically after he was saved by the American ship. He was the first Japanese person that met the U.S. President and received an American education, which he eventually became a U.S. citizen.
Furthermore, he is the origin for those studying abroad from Japan. I was inspired by Joseph Heco as I was pondering on his struggles and his efforts to achieve his goal in such an unfamiliar country full of strangers.

I was able to gain a great courage and hope through this wonderful opportunity. I think the exhibition turned out great for the guests as well because they learned the life of Japanese proud Joseph Heco through Kamishibai, where the audience watch the sliding pictures and listen to the story.