The Daijayama is a treasure and strength of Omuta City which is one of the best festivals in the world.

Watanabe： The first time I saw the Daijayama was during the Grand Parade of the Honolulu Festival in 2003. I was very impressed by their rhythmical and powerful performance. Also, the Daijayama is often called a “fire-spitting dragon” in Hawaii, which I was almost in tears when it fired. In addition, I’m living in Hawaii since I was little so, I was skeptical about my knowledge about the Japanese festivals. However, I had a chance to visit Omuta City last year which I was able to witness the original Daijayama in person. 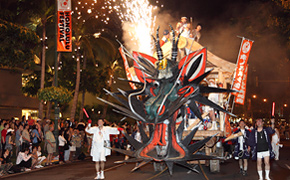 Tsutsumi： I see the Daijayama as an “uncrowned monarch”. It may not be famous as some of the popular festivals all over Japan. However, it is captivating because of the lights and sound as well as its powerful appearance. Hence, it can be said that the Daijayama is a combination of excellent materials. 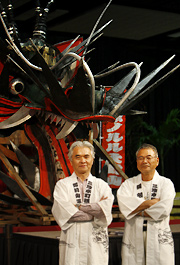 Miyazaki： Correct. As mentioned previously, there are well-established festivals compared to the Daijayama. However, the Daijayama is richer in its history than some of the famous festivals in Japan. In addition, we are here to present our Daijayama in Honolulu and make it a wonderful event. I believe that our passion will be the factor in spreading our festival to the world.
By the way historical speaking, tyhe warriors from Tachibana Clan of Yanagawa Domain which used to rule the land of Omuta were given praise and reward by the shogunate for their achievements during Shimabara Rebellion. This history is reflected in the music of the Daijayama which leads into the courageous theme during the first appearance. Also, the music will change to the commemorative theme for those that are killed or injured in the battle. There is a slight change in the music even though the music itself is the same.

In addition, the Daijayama was discontinued due to World War II but afterwards, it was resumed which came this far. We would like to develop into the world’s Daijayama by revitalizing and learning more about its history.

Tsutsumi： The performance of the Honolulu Daijayama that we are able to show in Honolulu can be described as a big blooming flower specifically above the surface of the ground, where you can feel the energy of it. At the same time, the Daijayama is closely related to the Shinto ritual and spiritual culture in Japan. Hence, it can be a place to teach about the local events or practices, where the communities and children gather. Also, there is a tradition where the grandparents teach their children or grandchildren about various tasks that involve in creating the Daijayama such as cutting the bamboos and pasting papers which can be described as beneath the surface that is serving as a foundation of a big blooming flower.

If you are interested in the Daijayama, it will be peformed in Omuta City during the end of July on the final weekend every year. Please come and watch the performance of the Omuta Daijayama.

Kawano： As Mr. Tsutsumi have mentioned, the Omuta Daijayama will be held on the final weekend of July. Mr. Okubo and Mr. Watanabe came to Omuta City last year. I believe they may be astonished by the powerful Daijayama which you will never know until you actually see it. We are pleased to present our exciting festival once the people from Hawaii as well as all over the U.S. make a visit to Omuta City.

Furthermore, only one cart will be used for the Honolulu Daijayama. On the other hand, there are six Shinto shrines including the ancient shirines in Omuta City. Each of them owns a cart which all of them will be presented during the Omuta Daijayama.

Tsutsumi： The Daijayama is also referred to as the Gion Festival which is known to end spectacularly with its demise. All of the Daijayama’s carts will be destroyed in a moment even though they took several months to build. Also, each shrine has their own ways of destroying the Daijayama by letting the children climb up on the cart or simply burning them and so forth. I think it is a beauty of the Japanese spiritual culture which I want people to witness. 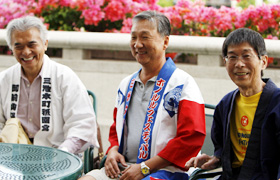 We have a bit of a problem these days… The problem is that the excited spectators enter the streets during our performance. We are having a very hard time to push them aside. I guess it means many are looking forward to enjoy our Daijayama.

There are some of the famous parades in the U.S. such as the Macy’s Thanksgiving Parade in New York. However, as Mr. Kawano have mentioned, they lack power and carts compared to the Daijayama. Our passion is to make the Daijayama one of the main events of the Honolulu that can represents the Honolulu Festival. 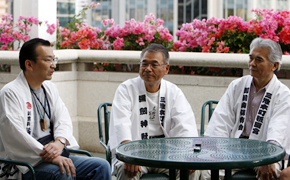 Kawano： I was watching the Grand Parade with disappointment 2 years ago, where the cart of the Daijayama was absent. It as such a lonesome feeling which was also frustrating. We were able to perform the Daijayama again as a result of revealing our frustration to Mr. Tsutsumi. Thus, we must continue performing in the Grand Parade for a long time.

Okubo： We received the mini-sized “Chibbiko Daijayama” for the local children to be familar with the Daijayama. It made a debut in this year’s Grand Parade.

Watanabe： In addition, we would like for people to know the meaning of the Daijayama. Most people in Hawaii are English speakers who don’t know the Japanese language. Hence, the language should be translated to English or other familiar languages that are spoken by the locals and so forth. Then, the number of the volunteers may eventually increase in the future. Also, we believe that if people start participating in the parade, they will understand more about the Daijayama.

We would like to put our effort in encouraging people to participate in assembling the Daijayama and also for them to take part in the parade after they have learned about it. Tsutsumi： I can already see some budding sprouts of the volunteers that support the Honolulu Daijayama. For instance, there are fire fighters and truck drivers that are taking their day off to help us out.

Also, the members of the Hawaii Fukuoka Kenjinkai, as well as the first, second and third generation Japanese in Hawaii are the core of our volunteer team. We would like to increase the number of volunteers with them like a snowball effect and we will give our full support as well.

Kawano： I was talking with Mr. Okubo last year about presenting the Omuta Daijayama along with the Honolulu Daijayama to mark the 20th anniversary of the Honolulu Festival. Our plan is for the locals of Hawaii to perform the Honolulu Daijayama and we will bring out our Daijayama from Omuta City. This way, the audience can see the difference between them and also the festival will be more powerful. We are really hoping to make this happen.

Tsutsumi： You’re right. Then please extend your retirement to make it happen. 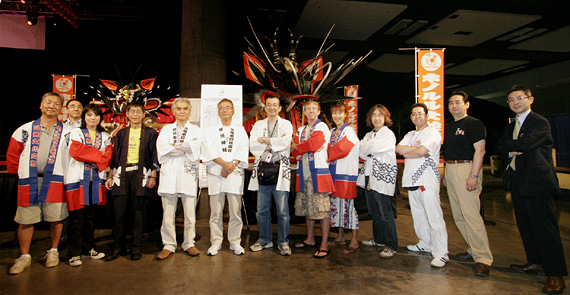 The members that support the Honolulu Daijayama

The Omuta Daijayama is attracting over 400,000 people during every summer. The carts used for the festival are all over 10 meters long which will be led by hundreds of people and parade around Omuta City. A total of over 10 carts will be presented which the crowd will be overwhelmed by the energy and power of the Omuta Daijayama. The scene where the Daija spit fire provides excitement and inspiration which will shake one’s mind.
Website ： http://www.sekoia.org/daijya.htm (Japanese)