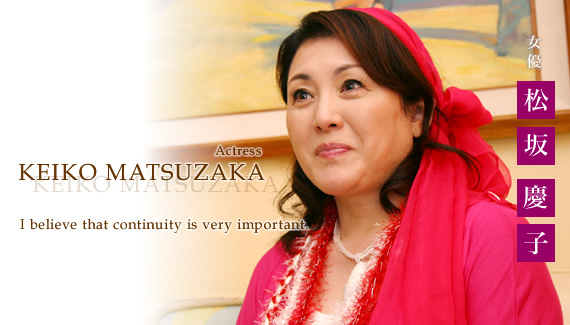 The actress Keiko Matsuzaka dedicated 10 years of her life to the play Tenshu Monogatari. She said that she is hoping to continue to perform in Hawaii. Also, her feeling as a long distance mother is gradually being developed to spread the Japanese culture to people around the world.

We interviewed Keiko Matsuzaka after her performance at the 15th Annual Honolulu Festival, which was also her first year to perform in Hawaii.

— First of all, please tell us why you started performing in the Tenshu Monogatari? 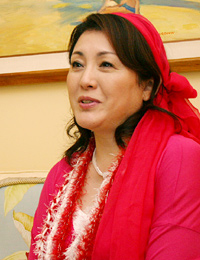 When my children were little, we were living in New York. We had an opportunity to go watch some academic plays such as Kabuki and so forth, but as a mother of two small children, I wanted to watch a play that’s like a graceful Japanese fairy tale with my family. Also, I really like the Tenshu Monogatari by Kyoka Izumi so I chose to develop it as a play which came to fruition.

About 10 years ago, our first Tenshu Monogatari was performed at the Japan Society of New York, where we did recitation and musical performance. Later, we held a public reading at the Suntory Hall in Japan. Also, it was turned into a drama by Mr. Mannojo Nomura, who is a Kyogen performer that composed the “Daidengaku”. We also performed at the Noh Theater located inside the Cerulean Tower in Shibuya.

Last year, we restructured the play to a Reader’s Theater, which the communities can be involved as well. Also, Mr. Rintaro Mayuzumi, who is the NHK’s Executive Director was willing to be our director for the Tenshu Monogatari because he was a close friend of Mr. Mannnojo since their school days. We were able to create a new form of the play with him. I would like to continue performing for the next 10 years in Japan as well as in Hawaii.

— How was performing for the first year at the Honolulu Festival as well as in Hawaii? There were over 1,000 seats in the spacious area at the Hawaii Convention Center. The audiences were focused on our performance so we were able to focus during our show.

The Tenshu Monogatari that we had performed at the Honolulu Festival was a 30 minutes version of our original play. Despite of it, I think the tempo was smoother than our usual show because the time was shortened efficiently. Also, we were aware that some of the audiences are non-Japanese speakers, so we kept in mind for each character to perform without relying on verbal expressions alone, which we had a good reaction from the audiences. Also, our director, Mr. Mayuzumi praised us that it was our best performance. Once again, I felt that our play became more mature and progressed as a result of performing in Hawaii.

This time, some of our performers were from Yamashiro, Ito, Takasaki and Kyoto in Japan as well as from Hawaii, which we were able to interact with them. Everybody told us to continue performing our play forever. They were also supportive and said “we will practice again tomorrow.” The sense of accomplishment was more than we’ve expected.

Also, we were successful because of our positive thinking of “Let’s cooperate each other to make it successful” which we all had. We were talking that whether this is the power of Hawaii.

We would like to appreciate those volunteer spirits which contributed in the background. We were able to perform successfully in Hawaii because of all your support.

— How was costarring with your daughters? 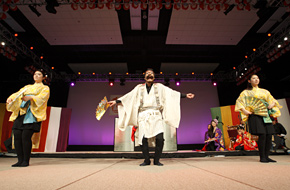 It was such an honor for them to be able to perform on a big stage in front of over 1,000 audiences. I feel thankful that they were able to have a great experience by involving in cultural exchange through acting.

My daughter Mone and Marissa appeared as the handmaids in the Tenshu Monogatari. Also, they appeared as the one who gives offerings to gods in the Daidengaku, where I performed as a shrine maiden.

At first, I thought it’s going to be wonderful if I can perform on stage with my family, so I went to ask Mr. Mayuzumi, “If possible, please give a role to my daughters as well. I don’t think they can act that much so adding one line will be more than enough.” Then, he added many lines to the script including dance scene with my daughters. I was overwhelmed by the difficulty which I was skeptical on whether they can successfully perform their roles.

In the beginning, my daughters were crying during the practice session because they were irritated that they couldn’t perform very well. However, they were able to speak loudly after about a month of training, which now they are able to perform successfully. Once again they were able to overcome their difficulties.

— Do you advise your daughters about their performance in the Daidengaku and Tenshumonogatari?

I’m a lenient parent so I can’t be tough to my children like Ikushima which is a character that I played in the Japanese drama titled Atsuhime (laughs). I wasn’t that strict because a lot of times, I was absent from home. However, this opportunity allowed me to be stricter and began telling them to practice the play in their mind for 5 minutes every day regardless of their homework or exam.

I won’t be impressed about how good or bad their skills are, but their commitment shows sincerity to the audiences which is why I encourage my daughters to do it every day. We were able to have rare conversations through Japanese performing arts which my family became happier.

— You were saying that you want us to see the ‘authenticity’ in those plays, but we were also able to feel the genuineness even from the costumes.

Thank you very much, I’m pleased to hear that. The costume is really important because it carries certain message of the play. Our costumes are coordinated by the tailors who are involved in the major business in Japan.

— Which means that the ‘authentic’ performers are really involved in these plays? Yes, that’s correct. Also, the performers that I love and respect are involved in this project. They are wonderful with full of spirits that gathered not for their business but for cultural exchange. If we hosted as a business, then it will be more difficult to gather this much top-notch performers. I think the production cost will be much higher as well.

I was really excited especially because Man Nomura, who is a Kyogen master of the Izumi School of Kyogen and a National Living Treasure of Japan came to see our performance. Also, whenever I perform with his son Mr. Manzo Nomura, I can experience the ‘true’ classic which I get motivated to do my best. At the same time, I feel like we benefited from performing with him because to work with the real classical theater performer also means that there is a presence of 300 years, so we can feel reassured and perform better. Our performers from Hawaii have felt something as well since they were performing with the authentic Kyogen performers.

The world of classical theater such as Kyogen has been passed down from the forefathers. I think it is wonderful that it embraces humanity by inheriting the tradition.

— The atmosphere can be different if you’re with a person who has mastered a skill of any sort.

Even a professional actress like myself feel very honored to perform on stage with Mr. Manzo Nomura. Also, we including Mr. Man Nomura are in show biz but in a different way. The classical theater such as Kyogen has a solid foundation. Let’s say it is “mastering the way” like kendo, judo and the Japanese tea ceremony. So, if I’m with a Kyogen performer, I feel the calmness as if I’m mastering my way. Also, I feel serene when Mr. Manzo Nomura is doing our choreography. The time I spend performing with him is my spiritual support which purifies my heart as well.

— By the way, were there any hardships that you faced during the performance?

I think there were various hardships. This time Mr. Akasaka, who is a producer from a non-profit organization called ACT. JT in which Mr. Man Nomura is the chairman produced our show.

If you’re trying to make it a great show, you may say that the big instruments are ideal and so on. In reality, we were taking a plane so we said “Please select the instrument that can fit inside the duralumin case” (laughs). Then, we came up with various ideas such as “Let’s collaborate between the taiko drum and ipu instrument (Hawaiian percussion instrument)” which we had a fun time brainstorming.

We localize our show when we perform in Japan as well. For instance, we wear a mask of crow in Yamashiro Onsen, Ishikawa Prefecture, where the hot spring prospered which was believed to be found by the three-legged crow called Yatagarasu. Also, we wear a camellia flower when we perform in Ito City, Shizuoka Prefecture because the city is well-known for Japanese camellia. — Do you have any plans for the future regarding these plays? I believe that the continuity is really important. I was really pleased to hear that the local performers enjoyed performing and dancing in the Daidengaku and Tenshu Monogatari. They said that they will like to continue performing for our plays. Nothing can be done without their excitement.

Also, communities in various parts of Japan participate as dancers in the Daidengaku. Some are participating for 10 years. The Japanese word “Wazaogi” refers to peers on the stage. I hope to see Wazaogi in Hawaii since the local dancers were well memorized, which they seemed enjoying our dance.

The involvement of communities can lead to local revitalization and stronger family bonding as well as neighborhood bonding. For instance, during the day of your child’s performance, your neighbor may kindly offer to take care of your remaining business so you can go watch it.

The festival is a place where everybody can be friendly by taking a break from their daily life. It is wonderful to see the stronger bonding of communities and deepened relationship between grand parents and their grandchildren through watching our Daidengaku. It is embraced like that in Japan so I feel the same for Hawaii as well.

— Please continue performing for the next years or so in Hawaii. We believe that it will be a great opportunity for the locals to experience the Japanese culture. Thank you very much for today. The performers of Daidengaku and Tenshumonogatari.
Those on the left of Keiko Matsuzaka are the Kyogen Masters, Man Nomura and Manzo Nomura. The producer Rintaro Mayuzumi is on her right.