The Spiting Fire of the Honolulu Daijayama in the Grand Parade Also, the Educational School Tour was held on the same day where we invited students from elementary, junior high, high school in Oahu. Those students listened intriguingly on the topic of Daijayama in front of its head.

Furthermore, the Daijama’s head is made of bamboo and paper. Originally, it will be burned up and destroyed after the festival to ward off evil spirits in Omuta City, Fukuoka where the Daijayama Summer Festival was originated. On the other hand, the Honolulu Daijayama is kept in the storage facility in Sand Island near the Honolulu International Airport. It will be used only once a year which spits fire during the Grand Parade in Waikiki. In addition, the professional assemblers of the Daijayama’s cart from Omuta City came for the final inspection during the evening. Previously, the people from Omuta City used to assemble every part but the members of the Hawaii Fukuoka Kenjin Kai will be assembling the head with the local volunteers from this year. It seems like the tradition of Omuta City is steadily spreading among the locals of Hawaii starting from learning how to assemble. The resurrection of Daijayama by the hands of the local volunteers. 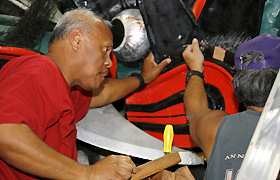 Each part is carefully assembled. During the afternoon of Saturday, March 14, we heard the sound of the taiko drums coming from the Hawaii Convention Center. There we saw the members of the Omuta Daijayama from Japan, which they were teaching how to play the taiko drum and bell to the local volunteers to prepare for the parade. In addition, they taught carefully without language barriers and the local volunteers were listening attentively as they learned about Daijayama. There were a few children from Omuta City during the practice session as a great instructor for the locals even though are still young.

Let’s not forget about the “Onnna Mikoshi”. Originally, the Daijayama Summer Festival was a festival for men only. Hence, the women were forbidden to touch or get on the carts. Therefore, they danced around them as the “Onna Mikoshi” to excite the festival which played an important role. In addition, they boosted the Honolulu Daijayama as well. This year, they were shouting vigorously and dancing with a folding fan as if they are supporting the carts that are controlled by men. Their dancing performance was powerful but moderate which had a strong presence in the Grand Parade. Relaxed atmosphere in between practice.

The members from Omuta City were impressed by the local’s great rhythmic sense. He was drumming so vigorously not to lose to the bigger drums. This is how the festival spirit is being inherited from an early age. The Daijayama’s cart was assembled near Kalakaua Avenue, where the Grand Parade will be held on the final day of the Honolulu Festival.

The 20 members of the Omuta Daijayama from Fukuoka Prefecture visited Hawaii to help assemble the cart of the Honolulu Daijayama with the members of the Hawaii Fukuoka Kenjin Kai and local volunteers. All of them participated in the parade as well.

The cart is difficult to assemble into a proper shape, if there is any space or misalignment, which requires fine adjustment by pushing, pulling and tapping the pieces after each of them is assembled. The passersby stopped to see the Honolulu Daijayama’s large cart which they looked intrigued. All of the parts are laid out before assembling them. Gradually, the shape turned to a cart. Each of the parts is being carefully assembled. The people of Omuta City and Honolulu cooperated each other.

The Honolulu Daijayama is obviously the best choice for the finale of the Grand Parade!

The Honolulu Daijayama will be appearing for the finale of the Grand Parade. This year, it appeared with the Chibikko Daijayama which is a small version of the original size. The gigantic cart of the Honolulu Daijayama weighs over 2 ton. The spectators were excited and thrilled as they heard sound of the ringing bells gets nearer and louder. In addition, the fireworks were sparking brightly from the cart as it appeared through the scattering smoke. The spectators gave a big round of applause and the Grand Parade has reached its climax.

Furthermore, the 15th Annual Honolulu Festival came to an end as the flame from Daijayama slowly disappeared. The members of the Chibikko Daijayama with the local volunteers.

VOICE
We are glad to share the tradition of Fukuoka Prefecture and we hope that this will revitalize Omuta City.

Koichi Isayama- the former representative of the Hawaii Fukuoka Kenjin Kai
Fukuoka Prefecture became a sister state of Hawaii in 1982. Omuta City, where once prospered with coal mining  gave us an idea of showing the Omuta Daijayama’s carts in Hawaii. I’m glad that I was able to share the tradition of Fukuoka Prefecture and I hope that this will revitalize Omuta City. We will be participating next year as well.
VOICE
I can’t imagine a year that I don’t partcipate in the Honolulu Daijayama.

Thomas- volunteer staff
The cart used for the Honolulu Daijayama was brought by the people of Omuta City in Fukuoka Prefecture from their city to Hawaii. It is assembled with the members of the Hawaii Fukuoka Kenjin Kai under the guidance of the people from Omuta City. The cart weighs over 2 ton which require very extensive process. I was impressed by the finished material which looked rich and grand. It takes over 4 hours to assemble however, this will be a great opportunity to work with others and participate in the parade.
Also, I had a chance to participate during the year when Daijayama joined the Honolulu Festival for the first time. Until then, I never knew or experience the Japanese festival however, when I participated in the parade for the first time, my adrenaline pumped up. From then on, I have been participating as a volunteer every year.

To tell you the truth, I get very nervous in front of thousands spectators on the roadside of Kalakaua Avenue during the parade. Despite of it, my nervousness eventually disappears and the place becomes a melting pot of excitement or “festival fever” if you will, which gives you such an indescribable feeling. I can see children enjoying the Honolulu Daijayama with their eyes wide opened and a big smile. Also, I can hear the sound of a big applause from the spectators. In addition, the fireworks will be spitted out from the cart of the Honolulu Daijayama to the night sky over Waikiki. All of these things will contribute in enhancing your excitement during the parade. I’m usually working but I adjust my schedules, so that I can commit myself in volunteering during the festival period. I can’t imagine a year that I don’t partcipate in the Honolulu Daijayama. I’m already excited for next year.
VOICE
I feel special about being the member of the Honolulu Festival every year

Galen Aina- volunteer staff
I’m working as a volunteer staff for the Honolulu Daijayama from 3 years ago. I’m excited about this event every year which of course it will be held on next year as well. I love the sound of the taiko drum, assembling of the Daijayama’s cart and fireworks. Also, I love to watch the Honolulu Daijayama parading around the streets of Kalakaua Avenue. Moreover, I feel special about being the member of the Honolulu Festival every year.
VOICE
It’s fun to watch but the best part of the Japanese festival is to participate.

Yoshida- volunteer staff from Omuta City
I want those who have or haven’t seen Daijayama to watch the Honolulu Daijayama in various ways. As you can see, all of our members are enjoying the Honolulu Festival from bottom of our heart. It is fun to watch but the best part of the Japanese festival is to participate.