The members of Obama Girls & Obama Boys participated at the 15th Annual Honolulu Festival for the first time in 2009. Recently, “Obama for Obama” support group that promotes the city of Obama, Japan is gaining a lot of media attention even in the U.S., since its name is same as the President Obama. We interviewed Yasunori Maeno, who is the representative of Obama Girls & Obama Boys.

Please tell us about your group Obama Girls & Obama Boys.

I heard you’ve received a courtesy visit from the Mayor of Honolulu right after your arrival. Please tell us more about that.

Our flight was delayed about 20 minutes which we barely arrived at the state capitol on time. The ceremony was already started when we entered the building. As soon as we sat down, we were led to the stage. Then, we received a letter of gratitude which thanked our contribution to the President Obama. Afterwards, we’ve attended the welcoming luncheon as well as the welcoming reception which were hosted by the Mayor of Honolulu. Also, we handed our souvenirs that we brought from the city of Obama. In addition, there was an awarding ceremony, where we received participation award which I accepted it on behalf of our group.

We’ve heard that your group was interviewed by the local media later on. How was the TV station in Hawaii?

Yes, we went to the KITV station and performed hula. We got surprised because we were suddenly called to appear on their show. We’ve been to the TV station and appeared on the show in Japan but this was our first time to enter the TV station in Hawaii. Also, we introduced our original merchandise in the show. We were very pleased to be invited on the show. It does contribute to our future and also we were able to build friendship with others. The city of Obama handed their original T-shirt “I love Obama” to Honolulu.

Participation award was given by the Mayor of Honolulu, Mufi Hanneman. Two of them looked very pleased.

How much did your group practiced for this year’s Honolulu Festival?

We did it once a week. Every member has their job so we gathered around 6:00 p.m. and practiced until 9:30 p.m. for 2 hours. It is also good for losing weight and staying healthy.

Is your group performing hula in various places of Japan as well?

Obama Boys is performing less since the group is still new. On the other hand, Obama Girls is dancing the hula dance in various places. Both of them are scheduled to perform on May and June in Osaka. Also, the Honolulu Festival is the first major event for Obama Boys.

You are also dancing as one of the members of Obama Boys. How is hula?

I started dancing since November of last year. It is difficult but fun and it gives me a good feeling. I always liked playing sports such as golfing but now, I’m all about hula (laughs).

[ The scenes at the stage in Ala Moana ] 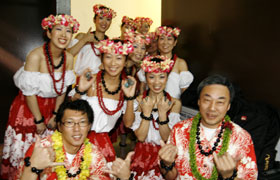 The members wait their turn in the backstage of the Ala Moana Center. They weren’t nervous rather they looked enjoying themselves. 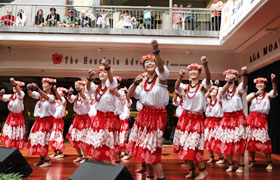 The member of Obama Girls kept their smiles and danced hula in a relaxed manner on stage, where the sunlight was shining. 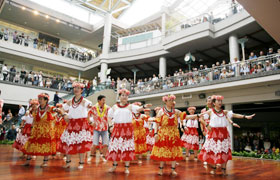 There were a lot of audiences from the 1st floor to the 3rd floor of the Ala Moana Center. They were fascinated by hula of Obama Girls & Obama Boys. Maeno from Obama Boys and Shimizu from Obama Girls were been interviewed by the media. They looked very busy even in Honolulu.

What are the plans for “Obama for Obama” support group in the future?

What kind of activities are you planning for the community building?

Our group is private which is run by civilians such as house wives and office workers so we are not forcing any activities but rather we are performing independently. We would like to keep expanding our groups in our ways. For instance, we held one event last year, where various private groups performed their hula. We are providing a place where everyone can join without constraint. We would like to gather many people with volunteer spirits. Also, it is our goal to encourage those from outside of Fukui Prefecture to come and enjoy the city of Obama.

In addition, we partnered with Hawaii Tourism Japan last year. Ashley Layfield, who won the Miss Hawaii 2007 came to our city and danced for us.

What do you think of the Honolulu Festival as a place for promoting your city?

Do you have any message for the audience of Hawaii, Hawaii legislators and Mayor of Honolulu?

Although we are still inexperienced group, please continue to support us. We would like to have an opportunity to perform hula in front of the President Obama someday in Honolulu. It might be a great idea for him to come and visit Japan afterwards. We appreciate for all your support.

[ The scenes of the Grand Parade ] 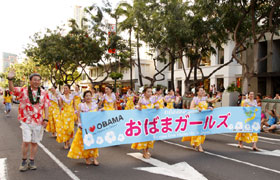 The Grand Parade was held on Kalakaua Avenue in Waikiki. The dancers promote the city of Obama to the crowd through their smiles and hula. 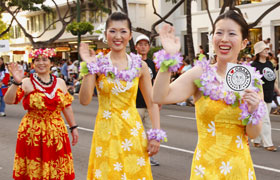 The performing members of Obama Girls are waving their hands to the crowd and holding their original Obama sticker. 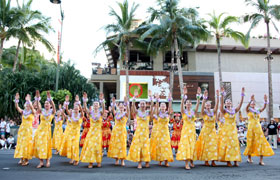 Obama Girls danced beautifully in unison. One cannot imagine that the group was formed a year ago.

VOICE
We were practicing for the Honolulu Festival every day.

Kiyomi Takahashi- dancer of Obama Girls
We officially started practicing for the Honolulu Festival this year which we practiced every day. Also, I was worried because it was raining during the parade but I was relieved since it became sunny by the time we appeared. I was able to enjoy dancing without a sense of nervousness. Thank you very much!

VOICE
I performed my best to promote the city of Obama to people around the world.

Tatsuya Sano- dancer of Obama Boys
I’m a beginner that started learning hula half a year ago. I was a bit nervous during the performance but I performed my best to promote the city of Obama to people around the world.

VOICE
We were able to enjoy watching hula.

Frank and Jody- audience
We’ve heard about the city of Obama on TV and internet but we never knew that there was a wonderful hula group which promotes their city. They showed such an amazing performance where we were able to enjoy watching such a beautiful hula.