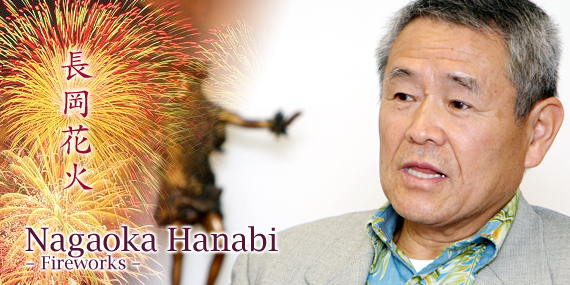 The Nagaoka Fireworks from Niigata Prefecture will be held at the 17th Annual Honolulu Festival. It will be launched with a wish for world peace. Also, this is an opportunity for both cities of Honolulu and Nagaoka to turn their battle scars of war into a unity. The Nagaoka Fireworks carries a special meaning, which took 2 years in preparation. Many including Nagaoka City and the Mayor of Nagaoka were enrolled in various activities to make this fireworks happen at the Honolulu Festival.

We were given an opportunity to interview Mr. Kazuo Nizawa, who is Vice President of the Executive Committee for Developing a Bridge of Friendship between Japan and USA.

The Calamities of War in Both Cities of Honolulu and Nagaoka; United Wish for World Peace

Both cities of Honolulu and Nagaoka have experienced the calamities of war. For instance, Nagaoka City was destroyed by the U.S. airstrikes during the Pacific War. On the other hand, the city of Honolulu suffered from the attack on Pearl Harbor by the Armed Forces of the Empire of Japan. Isoroku Yamamoto, who was in charge of the attack on Pearl Harbor and the one who opposed war against the U.S. was also from Nagaoka City. 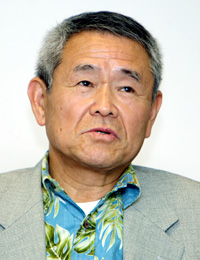 August 15, 1945, was the day that the war ended however, Nagaoka City was tremendously damaged from the airstrikes on August 1. It was difficult to make ends meet on the following year. Yet, the Nagaoka Fireworks was launched to remember the victims of the war and for the war damage reconstruction with a wish for world peace. For we shall not repeat the evil of war. Every year, the fireworks have been launched on August 2 and August 3 in Nagaoka City.

We want the youth to ponder deeply about world peace by watching the Nagaoka Fireworks at the Honolulu Festival. It is our desire for the people around the world especially the young generations to keep world peace in mind and spread the words. Paul Heintz, who is an education director of Arizona Memorial Museum continues to teach peace education to the youth, which his idea is similar to ours.

The Nagaoka Fireworks is a Tradition of Nagaoka City

Nagaoka City has a population of about 2,830,000 people. There is the Shinano River which is the longest river in Japan that is 1,000 meter wide. It is located in the middle of the city which is a 10 minute walk from the city’s main train station. This is a place where the Nagaoka Fireworks is being held for a long time. In addition, the river is spacious enough to launch big fireworks which eventually gained popularity. Three-Shaku fireworks shell is used in the Nagaoka Fireworks which has a diameter of 1 meter and it will be launched up to 600 meters into the sky. It can be said that it is the biggest fireworks of Japan however, it is not just about the size. The skills to create and launch the shells are very important. There are local pyrotechnicians of Nagaoka City which they embrace those teachings to this day.Hence, it can be said that their skill itself is the tradition of the city.

The Honolulu Festival gave us an opportunity to show our traditional fireworks to the people of Honolulu and the visitors from overseas. Also, this is a chance to let people know about Nagaoka City.

The fireworks are not just about the light and sparks. You can enjoy the dynamic sound of boom, which people of Nagaoka City describe it as “reverberates in one’s stomach” that is considered as the appeal of the Nagaoka Fireworks. You can watch it from within the city limit of Nagaoka however, if you go to the embankment of the Shinano River, it feels a lot different. Also, you can have a better view of the Nagaoka Fireworks in Honolulu than in Nagaoka City because the distance is closer from the firing site. I think you can watch such a powerful display with dynamic sounds.

The Nagaoka Fireworks will be launched from 3 barges which are 300 meters offshore of Waikiki. First, 3 shots of Shaku firework shells which each has a diameter of 30 cm will be launched to commemorate the victims of war in the city of Honolulu as well as Nagaoka City. Normally, some of the fireworks festivals in Japan use a shell that has a diameter of 15 cm. Hence, you can imagine how big the Nagaoka Fireworks will be just by the comparison.

Next, we will be launching 4 shots of fireworks including set pieces and Star Mines. I’ve seen the fireworks festivals all over Japan and I realized the unique feature of the Nagaoka Fireworks, which is that each firework go up in such short intervals where you barely wait for the next one to be launched. Also, the Shaku fireworks shells will be used for set pieces as well, which we will be bringing about 100 of them this year.

After 9/11, we were prohibited to bring the fireworks shells outside Japan however, we were allowed for the first time upon participating this year’s Honolulu Festival.

The Nagaoka Fireworks couldn’t be possible without the understanding from the city authorities and supporters in Honolulu. Also, we are very much aware of our significance in holding our fireworks at the Honolulu Festival. Although we cannot replicate the exact scale, we will show a spectacular show, so we hope that many will come and watch the Nagaoka Fireworks. Hawaiian105 KINE will be broadcasting music during the show from 8:30pm-8:45pm. If you bring your own radio device, you can enjoy listening to the music while watching the fireworks.

1. A Prayer for World Peace: 3 single shot
Three shots of fireworks will be launched to commemorate the victims of Pearl Harbor and Nagaoka air raid with a wish to foster goodwill between Japan and the U.S., and for world peace.

3. Sakura Sakura: Star Mines, set pieces
The pink colored fireworks depicting a color of cherry blossom will be launched along with the rearranged version of a traditional Japanese song called Sakura Sakura.

4. Blue Hawaii: Star Mines, set pieces
The blue colored fireworks which the color was inspired by the movie Blue Hawaii starring Elvis Presley will be launched to the sky.

5. Tenchijin: Star Mines, set pieces
The theme of this fireworks was inspired by the life of Naoe Kanetsugu, who was a Japanese samurai and also depicted on the historical Japanese drama titled Tenchijin, which is popular in Hawaii. The fireworks will be launched along with a theme song of the drama.

*Details are effective December 2010 and are subject to change without notice.