The Grand Parade was held on Sunday, March 4, 2012, on the streets of Kalakaua Avenue in Waikiki.

The opening was at 4:30 p.m., but there were many spectators that gathered along the roadside before the starting.
Last year’s Grand Parade turned out to be short because many of our annual participating groups from Japan were absent due to the Great East Japan Earthquake. However, our regular Japanese performers were present this year which made the parade lively. They are a cheerleading group from Inha University in Korea.

The opening performances were held at 4 locations around Kalakaua Avenue.

The students of Tokyo Universiy of Foreign Studies Welina! performed their Polynesian dance in front of the Fort De Russy Beach Park, where it was also a starting point of the parade. In addition, a cheerleading team and a dancer team of Inha University performed in front of the Waikiki Shopping Plaza.

Those vigorous performances by the young members can make you feel uplifted.

The member of the “Star Mixed Chorus” which is a group that consists of famous Japanese celebrities such as Kuniko Yamada, Chieko Baisho and Junko Koshino performed a chorus in front of the Moana Surfrider, A Westin Resort & Spa, where the VIP seats were reserved. This group was formed to support cancer patients and their families in 2008. They’ve made a visit to hospitals and held a charity concert after the Honolulu Festival.

Moreover, Nihon Karatedo Shotokai Burarian performed Japanese martial art called karate. Also, Dai Hirai who is a ukulele player performed his theme song that he composed for the Honolulu Festival. They performed in front of the Pacific Beach Hotel. Kuniko Yamada is a head of the Star Mixed Chorus

The Star Mixed Chorus is a group that consist of Japanese celebrities from various industries.

The main parade began after the opening performances. The police motorcycles of the Honolulu Police Department appeared and led the parading routes as usual.

The first appearance was a convertible owned by the Mayor of Honolulu. However, the Mayor himself was walking in front of his vehicle as he waved his hands and greeted the spectators along the roadside. Also he was wearing a happi in which the design of Honolulu Festival was written. We were surprised by the humorousness of the Mayor which also felt a sense of friendliness by his personality.

The next appearances were the Mayor of Nagaoka City named Tamio Mori and a film director named Nobuhiko Obayashi, which they were sitting in the convertible. Their relationship was bonded through the Nagaoka Fireworks of Niigata Prefecture.

In addition, Obayashi filmed a movie on the Nagaoka Fireworks, which was showing at the Honolulu Festival prior to the official release in Japan. Mayor of Honolulu, Peter Carlisle walked instead of riding in his convertible. 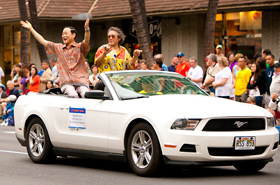 The Mayor of Nagaoka City Tamio Mori and a film director Nobuhiko Obayashi was sitting in the convertible.

Next appeared were the winners of the beauty pageants in Hawaii such as Miss Cherry Blossom and Ms. Chinatown, which they flashed their smiles to the spectators.

There were various ethnic groups and cultures from the countries of Asia-Pacific region such as Korea, Philippine, Taiwan, Australia, Tahiti, Alaska and Japan. Every country has gathered to perform in Hawaii, which felt a sense of bonding. The participating groups waved their hands with a smile, which the spectators smiled back at them. Everybody looked delighted with happiness. 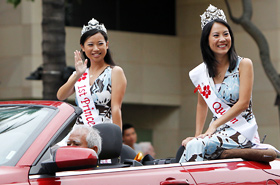 They are Ms. Cherry Blossom. They are the Goodwill Delegation from Hiroshima, which the city of Hiroshima is one of the sister-cities of Honolulu. 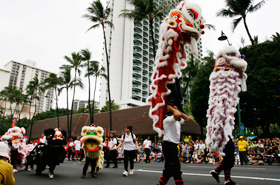 It is been told that the lion dance from Chinese traditional performing arts will bring a good fortune. 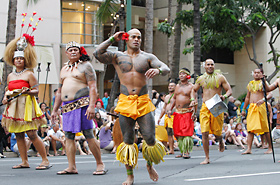 The members of the Sogaimiti & Malu Organization showed their traditional Samoan tattoos that were engraved on the body. They are the members of the Korean Traditional Music Association of Hawaii. The traditional Korean percussion instruments such as the drums and bells has been passed on for many generations to preserve the traditional art of Korea. They are the members of Anela. Hula Studio. Their gorgeous attire and the rhythmic dance blew away the rain. There are more than 100 students that participate from Sonoda Gakuen High School every year. They showed their vigorous performance this year as well. They are the members of Puanani Kobayashi Hula School. They have been practicing hard to perform their dance in Hawaii where the hula dance was originated. The mikoshi is a must for the summer festivals in Japan. The shouts of “WASSHOI!” from the children created a pleasant vibe.

A big float of the Ryujin by Saitama Ryujin Matsuri Kai sometimes charged toward the spectators. This is neputa from Hirosaki, Aomori Prefecture. There was a word “Kizuna (bond)” written on the drawings of the lantern, which recognized the importance of bonding by the tragedy of the Great East Japan Earthquake. The finale of the parade was the Honolulu Daijayama. Their impressive performance is a surprise every year.

There were times when it was raining in the middle of the parade however, the number of spectators didn’t decrease which everybody looked preoccupied with watching the performances.

The Grand Parade ended successfully. Reminiscing about our last year, the Great East Japan Earthquake had occurred the night before the Honolulu Festival which the annual participants from Japan were impossible to attend. Hence, we were concerned whether the festival can be held. We realized that it is fortunate for various countries such as Japan and others to be able to gather at the Honolulu Festival which shouldn’t be taken for granted.