The “Share Your Voice Project” is an educational collaborative project between the Honolulu Festival and Kapiolani Community College. It has been launched since 2010 which will be held for the fourth time for the festival.

In addition to the students from the Japanese language class offered at Kapiolani Community College, there were volunteers from Nagasaki University in Nagasaki Prefecture and Hair Art College Kinami Gakuen in Aomori Prefecture as part of their study tour. There were nearly 70 volunteers that participated in this project. 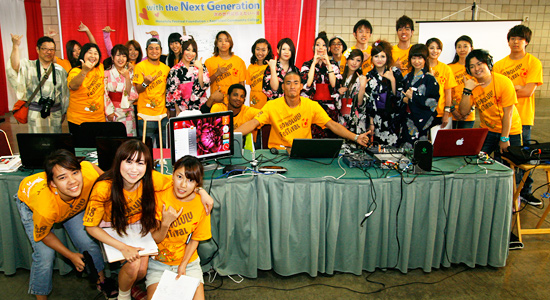 Furthermore, the project was launched initially for the locals of Hawaii to embrace the Honolulu Festival and spread the word especially to the young generation. From an educational view-point, it is important for them to discover various people and cultures from around the world through cultural exchange. Overall, the project was significant for the students of Japan and Hawaii to collaborate effectively, even though they have different educational background. Each student collaborated with their leader. 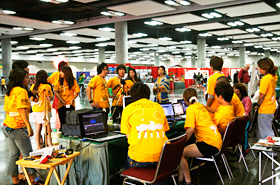 Above is the booth of “Share Your Voice Project” located inside the Hawaii Convention Center.

In addition, each student was given a role to report on the Honolulu Festival and how fabulous it is. There were students in charge of the interview and filming videos of the performers as well as the visitors in the events. The various performances held on the main stage of the Hawaii Convention Center as well as the scenes of the Grand Parade were live-streamed. Also, the students utilized the social media such as Facebook to report on their own experience in real-time. Above is a scene where one of the students interviewing the performers. Have you discovered some of good things about the Honolulu Festival?

Everybody was willing to do an impromptu interview. They may have noticed a sincere effort by the students. The students of both Nagasaki University and Kapiolani Community College showed their collaboration. The student went around the booths and reported on them.

The Grand Parade was live-streamed from Waikiki. Many of our cameras were present to capture the scenes of the Grand Parade.

After the project, a majority of the students claim “I’m more culturally aware through this event, which allowed me to discover various people and cultures from different countries. Also, this project made me rethink about my own culture”. Moreover, the students of Hair Art College Kinami Gakuen participated in a yukata, which fascinated the visitors with its prettiness. It seemed that the Japanese visitors have become culturally aware of their own culture by the presence of yukata, which some of them were eager to take pictures with those students.

The culture was made by each nation after many years which became part of one’s identity. If many of our young generation become culturally aware of one’s own culture and value different cultures, the world will be united as one. We will continue to host various cultural exchange programs for the young generation as well as the people around the world. The interview created an opportunity for conversation with the people from various countries. “Share Your Voice Project” was a great opportunity to introduce a Japanese traditional garment toward the visitors of the Honolulu Festival. The students of Hair Art College Kinami Gakuen were interviewed about their home town back in Aomori. Not to mention, the students of Kapiolani Community College have translated the language from Japanese to English.