The Educational School Tours was held at the Hawaii Convention Center on Friday, March 1, 2013. Normally, the schools in Oahu are only invited to this tour, however it was opened to public this year as well.

Furthermore, the purpose of this tour is to learn traditional cultures from various countries by watching, listening and experiencing them in a short period. It is favored among students, parents and teachers every year. 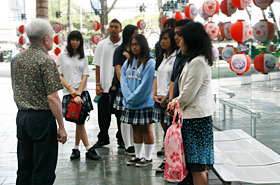 The history of the Honolulu Festival was presented on these panels. The Honolulu Daijayama Booster Group from Omuta City, Fukuoka Prefecture in Japan spoke about the traditions of Japanese culture and religious beliefs. The students enjoyed watching closely at the assembling of a gigantic Japanese traditional lantern called Toro built for the traditional performance by Hirosaki Neputa Manji Kai. The children were amazed by the various shapes of origami, which were folded from a single sheet of paper. The audience enjoyed the performance by the yosakoi dancers as they danced energetically using their whole body swinging from right to left. The students were intrigued by the art of ikebana. Each flower and tree branch was meticulously prepared by one of our participating groups called Ikebana Sogetsu-ryu ALT-22

One of the teachers from Hawaii Baptist Academy said, “It was a pleasant experience for the students because not only do they get to watch or listen to the taiko drum, but also they can actually experience playing it. I would like to share our experience when I return to school”. A girl named Celeste, who is a student from New Hope Christian School challenged on playing a Korean flute called the daegeum. She has learned to play the western concert flute, so we asked its differences. Celeste answered, “The daegaeum is heavier…” Not to mention, it is difficult for a person to hold this instrument because of its thickness and length which is twice or more than the size of the western flute. This was a moment when Celeste made a discovery of the unique materials and different sizes used for the foreign instrument. Also, her mother said that her daughter had a rare experience! The students were learning to play the taiko drum by watching their instructor. The students experienced the vibrations and a powerful sound of the taiko. It can be problematic to hold the daegeum which is about 3 ft long. The students were mesmerized by the sounds of foreign instruments.

There were a lot of smiles when the students of the Taipei National University of the Arts performed their traditional music and the Chinese lion dance, which the audience was able to experience as well. The sound of a loud gong and the winsome face of Taiwanese lion gave a pleasant learning experience for the students. Furthermore, there was a booth for the traditional Japanese tea ceremony, where the presenters explained about each utensil and the history of Japanese spiritualism. The students sipped a bowl of tea with a sense of serenity. The children looked entertained by a unique appearance of the Taiwanese lion. The children were eager to participate in the lion dance. You can feel a sense of peaceful future from the children’s smiles that enjoy cultural change. The Educational School Tours was a place for cultural exchange between the children of Hawaii and the students of the Taipei National University of the Arts. The students learned about the Japanese culture by experiencing the Japanese tea ceremony also known as sado. The students looked nervous as they drink their tea in a quiet space.

The Educational School Tour gave an opportunity for cultural exchange, which allowed the students to foster their knowledge and broaden their world perspective. We believe that the world will be a better place if many children cultivate their worldview by exposing themselves to various cultures, similarly to one of the themes of this year’s Honolulu Festival, “Transforming the world; Connect! Discover! Let each experience fascinate you!”