Exhibitions, Craft Fair and Others

There were various events held at the Hawaii Convention Center on Saturday, March 2 and Sunday, March 3. There were a lot of guests by the doors opening at 10 p.m.

The following events were held inside the venue:

More than half of the venue was filled with various exhibitions of crafts and booths from Taiwan, Japan and the locals of Hawaii. They were uniquely creative and attractive, which one may struggle to make their decision to visit. Furthermore, the Nagaoka Fireworks and Nagaoka’s Japanese sake were introduced in the booth of Nagaoka City. One of the married couples from Canada tried the Japanese sake for the first time. Also, the shells for the Nagaoka Fireworks were displayed which attracted the passersby. Inside of the shell was packed with gun powders in order without a gap. One may not have imagined seeing such colorful and vibrant presentation of fireworks from a colorless shell. In addition, the Nagaoka Fireworks was held for the final day of the Honolulu Festival which mesmerized many spectators. There are interesting facts about the Nagaoka Fireworks such as its structuring, weight and dimension, which are surprising trivia. A married couple from Canada tried the Japanese sake for the first time. They commented, “It tastes different from the wine we usually drink.”

Moreover, Hawaiian products that are made in Hawaii are popular every year. They sell organic materials without the use of monosodium glutamate (MSG). Also, many of the items are handmade and original which are difficult to find anywhere else. “Made in Hawaii” products were so popular! The products such as peanut butter and lilikoi butter are all handmade. 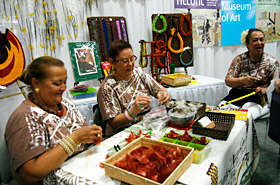 Feather lei making was demonstrated by the locals, which is a type of lei treasured by the Hawaiians since the era of Kingdom of Hawaii. Once again the Cosplay Cafe was popular among the youngsters this year. The Origami lesson was enjoyed by both children and adults. An art exhibition was organized by the local communities in Hawaii. The highlight of the bon dance was the debut of our big scaffold called “yagura”, which was well-built in the center of the Ennichi Corner. After our ribbon cutting ceremony, a lot of people gathered around the scaffold and danced to the echoing sound of the taiko drums.

There were 10 types of Ennichi games such as the goldfish scooping, yo-yo fishing, shooting gallery and quoits, which were enjoyed by many children. Also, there were booths of traditional Japanese games such as kendama and spinning top, which seemed challenging for some children. These games are starting to die out among the children in Japan, yet they are still popular in Hawaii. A ribbon cutting ceremony was held for the Honolulu Festival Yagura. The people gathered around the yagura and enjoyed the bon dance. A quick tip on the goldfish scooping is to scoop gently when a goldfish swims below the surface of the water. The local family from Sri Lanka experienced the goldfish scooping for the first time. Kendama is a traditional Japanese toy, which looks simple but difficult at the same time. The Ennichi Corner was busier than the previous years. It was similar to the summer festival in Japan.

Interestingly, the people were engagingly interacting with one other with smiles, even if they were strangers or speak a different language. The Honolulu Festival is a place where everybody can enjoy.