The Friendship Gala was held on Friday, March 1, 2013, at the Hawaii Convention Center. There were 10 famous local restaurants, such as Roy’s Hawaii Kai, Chef Mavro, 12th Avenue Grill, Mariposa, Ruth’s Chris Steakhouse, Nico’s at Pier 38, Tiki’s Grill and Bar, Hakone Restaurant, JJ Bistro and French Pastry and Honolulu Coffee Company. Each of them served their proud dishes of meats, fishes and desserts. The cheerleaders of Osaka Gakuin University from Japan welcomed each guest with lively “ALOHA” by the entrance as the doors opened at 6.30 p.m.. The delicious smell of various foods filled the venue. In addition, there was a long queue in each booth of the restaurant. It is enjoying waiting in line for the tasty food in pleasant anticipation. After the meal, each chef went on stage and introduced their self. We would like to appreciate all the chefs for offering such delicious dishes! The cheerleaders of Osaka Gakuin University welcomed each guest with energy and warmth. 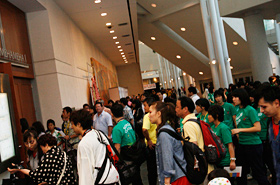 There were a lot of guests waiting outside by the entrance. 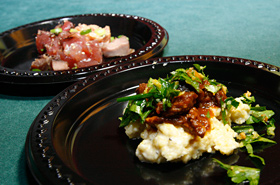 The Poke Sampler from Nico’s at Pier 38 and Braised Lamb and Fresh Hawaii Vegetables
from 12th Avenue Grill. 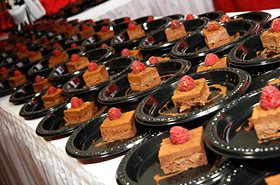 The chefs from each restaurant introduced on the stage. The Best Contribution Awards was given to the performing groups that participated for consecutive years at our festival. The opening was greeted by Kirk Caldwell, who is the Mayor of Honolulu.

The first performance on stage was given by the children’s hula group called, Halau Hula Olana Keiki Hula. They won many hula competitions and represent for Oahu, which one can’t imagine the skillful steps and mature expressions from their naïvety. In addition, the famous singer-songwriter from Maui, Anuhea appeared on stage. The following day was her concert tour on the U.S Mainland. Despite of her busy schedule, she was willing to participate in the Friendship Gala. She played the guitar along with her percussionist. Her beautiful voice and sound of the instruments entertained the audience. Anuhea sang in her little husky voice accompanied by her acoustic guitar, which made the song harmonious. A lively and vigorous dance performance by Sonoda Gakuen High School from Hyogo Prefecture, Japan was one of the anticipated shows. The dancers were selected over 100 students, which they performed amazingly that even their own peers cheered them.

Furthermore, Youth Theatre Japan also from Hyogo Prefecture performed their songs and dances. The performers were children however, they are experienced enough to do their shows locally and globally.

The last performance was by Sugaren from Japan which they performed differently than last year. The crowded movement of the dancers with a blight red dress looked as if it was a blazing fire. In addition, their dance spirit was hot as fire. At last, the audience danced  along with them, which the show concluded with happiness.

The Friendship Gala is a place to enjoy various dishes from Oahu’s finest restaurants and a place for cultural exchange. It can also serve as a place for a reunion among our annual participants. Our festival will be more enjoyable and memorable by developing each fellowship and making new friends! Those young entertainers of Youth Theatre Japan dancing and singing in English have potentials for success on an international sale. The powerful and dynamic dance performance by Sugaren will fascinate the audience. The audience went on stage to dance along with Sugaren. The show reached its finale. Let’s all have fun again next year! Everybody will be your friend. Above is the picture of the members of Obu Hana Matsuri Obanakai with Miss Kona Coffee.