The Grand Parade was held on Kalakaua Avenue on the final day, Sunday, March 3, 2013. The crowds started to form along the roadside around 4 p.m.

There were four different sites for the opening performances:

After the opening performances, the parade began with a police motorcycle barricade which echoed on the streets as they led the parading routes. It was followed by the marching band which elevated our excitement. One can tell that the spectators are waiting with great anticipation. And then the Grand Parade began! The Honolulu Mayor, Kirk Caldwell was selected as a Grand Marshall of this year’s parade. He was smiling and waving to the crowds as he walked a long route in his Honolulu Festival’s happi. Next appeared were the winners of the beauty pageants in Hawaii such as Miss Kona Coffee and Miss Cherry Blossom. Then, next came the marching band which was followed by the cultural performances such as the Japanese mikoshi, the Chinese dragon dance and the Chinese lion dance. Also, there were people from Philippine, Korea, Samoa and Australia in their own traditional garment and paraded on the streets. 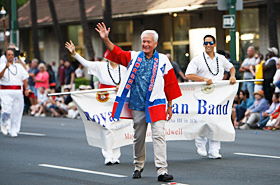 The Mayor of Hawaii greeted the spectators as he paraded along the streets of Kalakaua Avenue. They were the winners of Miss Cherry Blossom. The shouts of those carrying the mikoshi make you feel like you’re in the Japanese summer festival. The colorful Chinese lions made the parade lively! Samoan tattoo has several hundred years of long history as a culture. Apparently, Chinese lion from Taiwan is a female. She certainly looks charming! The traditional dress of Philippines was designed with detailed embroideries in which look artistic. Above is the Cheerleading Team of Inha University from Korea. A total of 150 students participated from Sonoda Gakuen High School in Hyogo Prefecture!

The most dynamic performance was by Saitama Ryujin Matsuri Kai. Their rising dragon called the Ryujin is about 50m tall, which looks like its ready to fly in the sky. Sometimes it charged toward the spectators along the roadside which excited them.

As the sun went down, the soft lighted glow of mikoshi and Hirosaki Neputa appeared with the sound of musical accompaniments similarly to the summer festival in Japan. The drawing on the float of Hirosaki Neputa was painted by only one artist for the sake of the parade. Usually, the design consisted of warriors from Chinese historical novels, Romance of the Three Kingdoms and Water Margin. This year, an illustration of the Battle of Kaosho from the story of Water Margin was painted.

Also, the final performance was the Honolulu Daijayama. The Daijayama’s cart appeared with the sparks of fireworks and a white cloud of smoke, which its head moved from left to right as it paraded along the streets. The parade reached its climax by the powerful presentation of the Daijayama accompanied by the musical accompaniment, which excited the spectators. There were many local volunteers for the performance of Saitama Ryujin Matsuri Kai. The giant figures of sumo wrestler and sumo referee were beautiful and dynamic! The slow rhythm from the flute and taiko drum resonated with the shouts of Hirosaki Manji Kai in Waikiki. The face of the Daijayama made a powerful impression, which was wide-eyed with its mouth opened.

Furthermore, the Nagaoka Fireworks from Niigata Prefecture was held in Waikiki Beach. Many spectators gathered by the beach to watch one of the best Japanese fireworks, which will be reflected in the sky of Waikiki. The purpose of the Nagaoka Fireworks is to commemorate those victims of the air raid during World War II in Nagaoka City for world peace. It became a great opportunity for cultural exchange between the people of any ethnicity or generation, which is one of the highlights of our Honolulu Festival! A big round of applause echoed through Waikiki Beach.