The Educational School Tour was held on March 11, 2016, at the Hawaii Convention Center. This is an educational program designed to embrace the importance of educating the youth, which they represent as the next generation.

The local students are invited to observe behind-the-scenes of the Honolulu Festival. This is a place where a lot of student experience different cultures every year.

The theme of this year’s Honolulu Festival was “Cultural Harmony, Journey to Peace” which best describe about this tour. Around 9 a.m., the local students came in a stream to the Hawaii Convention Center.
The artworks from the Honolulu Festival Art Contest were neatly displayed and welcomed the visitors.

Approximately, 830 students from 13 schools ranging from kindergarten to high school in Oahu have participated. More than 20 groups of artists and performers from all over the world have joined to demonstrate their cultures and traditions. 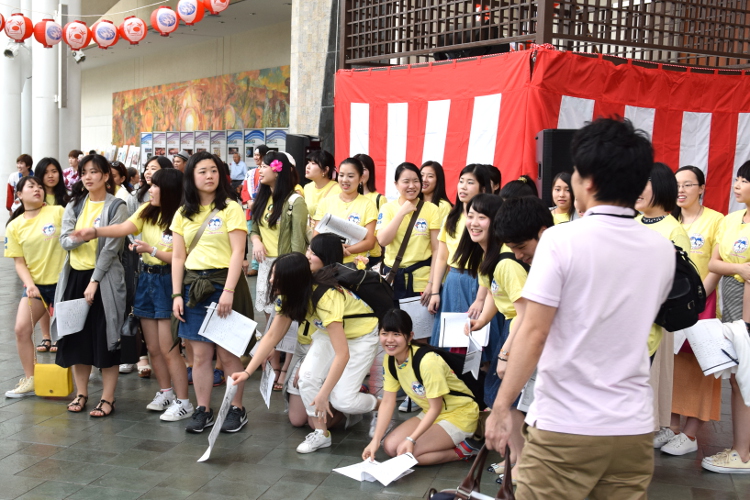 The students were divided into small groups and they were led by our staffs as well as our volunteers in a yellow t-shirts to explore the venue.

Due to a huge population of Japanese American in Hawaii, there were quite a few students that were interested in Japanese culture. They have experienced the taiko drum and challenged Japanese calligraphy. The Japanese traditional culture had always been very popular in the Educational School Tours. The students from Sakuragaoka Middle and High school stood out among all the participants this year. They have explained various Japanese traditions from their perspectives, which 10 of their booths were set by each Japanese tradition.

Also, they communicated with the local students by trying their best to explain in English. There were 3 groups that performed a smooth sword fight. The local students enjoyed the demonstration of an amazing sword battle. They were dying to try it themselves and felt as if they became the samurai. In addition, Kamishibai (picture card theater) and some popular Japanese anime were introduced as well. Above is the presentation of Japanese sports such as sumo and traditional arts. This is a lecture on how to use chopsticks and its mannerism. There was a game called, “How many beans can you move using chopsticks within a certain time?” Toward the end of the countdown, many students were so excited! Some of them were rushing so much that the beans were spilling everywhere. It was filled with many classic traditional Japanese games.

Furthermore, there were games such as a kendama, which was once very popular in Hawaii as well as origami, which requires one to sit down and be meticulous. There were also events that relate to Japanese Ennichi and festivities. In addition, there were games for the New year such as “shooting gallery”, “Fukuwarai”, “quoits”, “spinning top”, “Otedama”, “hagoita” and “Daruma-Otoshi”.

The local students might have felt comfortable with the students from Japan since they were close in age, which can be different from experiencing and learning by the professional adult performers.

-The Japanese Traditions Demonstrated By Adults-

Also, adults have skills to boast about. They have their own ways of teaching based on their knowledge and experiences. Hence, they can demonstrate something that is profound. “Ikebana Sogetsu-ryu ALT-22” was representing the sense of Japanese beauty. The students seemed to feel the unique sense of beauty from the demonstration using the flowers that were familiar to everybody. The children were very interested by the beautiful sound of hand bells which the students were performing popular music from the Disney.

Every year, Daijayama appears for the finale of the Grand Parade which is held on the final day. This “Daija” came from Omuta, Fukuoka. According to the folktale, Daija was the god of water that protected children’s health and enriched the farmlands.

Chigasaki’s well-known Soshu-Mikoshi! Everybody touched it, put it on their shoulder and fully enjoyed the festive mood. The group Taikokozo has been very popular every year. The big shout of “Yaaa!” echoed loudly in the room. -Cultures From the Other Countries-

There were also participants from other countries as well. There was a participating group called The Flag Wavers from Faenza from Italy for the first time. The group performed in the medieval uniform with flags of Faenza which were colored white, yellow, black, red and green.The flag bearers and the musicians of this group are the most talented in Italy. In fact, they have been awarded over 30 titles of Italian Championships in the ancient flag games.

Occasionally, the sound of the flags cut through the air and they were thrown up so high. The eyes of the students looked mesmerized, while the performers were flawlessly catching their flags. Here is the Jaran Aboriginal and Torres Strait Islander Dance Company from Australia.
The powerful long pipe looking flute is called didgeridoo, which is a wind instrument developed by Indigenous Australians. Although it is made of wood, it is classified as brass based upon the principal of how the sound is created.

Furthermore, the Wagana Aboriginal Dancers from Australia performed a comical dance, which the dancers amused the audience by mimicking the movement of a ostrich. Also, the students of Jeju National University held a lecture about a female diver again this year. In addition, the Taiwanese dance was performed by the Hawaii Taiwanese Center as well.

The smiles and the joy of the students were very impressive throughout the event. In addition, they were not the only the one who have learned, but rather it was more of an interactive activity between the performers. Thus, it is undeniable to claim that the performers must also have learned a lot from the students. They may be wondered, “how do those children feel about our performance?” “how can we show them so that they can enjoy and understand better?” or discovered “this is what they are interested in!” We can say that this is the attraction of cultural and cross-generational exchange.

What’s peace? What can we do for world peace?

Through our various cultural exchange programs, we hope to intrigue lots of young people to learn about various cultures and cultivate their knowledge for world peace.