The Nagaoka Fireworks was held for the finale at the Honolulu Festival on Sunday, March 13, which bloomed gorgeously in the night sky over Waikiki Beach. Its themes were “memorial”, “recovery” and “world peace”. There were many spectators that were anticipated to watch the fireworks this year as well.Those fireworks were launched from offshore of the beach. 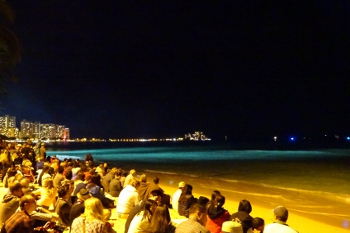 Lots of people have gathered to Waikiki Beach after the Grand Parade. The edge of the beach was filled with spectators who chose to watch the show closely.

It has been a gusty weather during March in Hawaii. However, it miraculously subsided and Hawaii was ready for the Nagaoka Fireworks!

The fireworks were collaborative performance between the city of Honolulu, Hawaii and Nagaoka, Japan. As you may know, the city of Honolulu suffered numerous casualties from the Japanese attack on Pearl Harbor. On the other hand, Nagaoka City, Niigata Prefecture is where Isoroku Yamamoto was born. He was the Naval Marshal General and Commander-in-Chief of the Combined Fleet of Japan. In the beginning, General Yamamoto opposed to launching the war against the U.S. Unfortunately, he was assigned as a Commander-in-Chief to attack on Pearl Harbor. Not to mention, Nagaoka City was also attacked by the American air raids.

Eventually, the 2 cities signed a sister-city agreement at the 18th Annual Honolulu Festival in March, hoping to pass down the message of peace to the next generations. Ever since then, both cities have developed a variety of cultural exchange programs. The Nagaoka Fireworks symbolizes an amicable relationship between Nagaoka City and Honolulu.

In the beginning, the 3 shots of white color fireworks were launched into the night sky at 8:30 p.m., commemorating those Japanese and American victims of war with “prayers for peace”.

Also, the music was played along with the fireworks display, effectively delighting the spectators’ emotions by utilizing the Live Fireworks Music Application Grucci. The series of fireworks were bloomed vividly in the darkness.

In addition, last year marked the 70th anniversary of the end of the Pacific War. Honolulu and Nagaoka City collaboratively hosted the Commemoration and Peace Ceremony on August 14 and August 15 at Pearl Harbor. Furthermore, the youths from both cities were invited and interacted with one another. Moreover, the Nagaoka Fireworks was held as a finale of the ceremony as well.

This year the fireworks called Star Mine, was launched which was accompanied by the song America the Beautiful played by the United States Navy.

The smell of gunpowder carried by the ocean breeze is one of the unique features of the Honolulu Festival. The last fireworks were launched lavishly, accompanied by the theme song of the popular historic Japanese drama called Ten Chi Jin. Those dynamic fireworks brightened up the beach. The spectators were elated then responded with great cheers and exultant shouts as each fireworks lit the sky.

This year’s Nagaoka Firework emphasized on the theme of “World Peace”.

We often wonder what it means to “be at peace” and to “have peace”. However if we passionately strive for peace, one day it will become a reality. In addition, we believed that if we have a mutual understanding of peace then we can achieve world peace.

The Honolulu Festival will continue to provide the gathering place for various people to come and have fun experiences.

Lastly, we would like to express our deep gratitude to the cities of Nagaoka and Honolulu, our sponsors, for their cooperation and support for the fireworks. Also we would like give our appreciation to those who have played parts in carrying out the fireworks shows over the years.