The Stage Performance was held at the various venues on Saturday, March 12 and Sunday, March 13, 2016.

There were 4 stages at the respective locations:

Each performer from all over the world such as Japan, Hawaii, Australia, Taiwan and Italy performed their traditional performing arts at the respective venues which excited many. One of the Japan’s renowned percussion instruments is the taiko drum. The group Wadaiko Mamezakura was formed for the 15th Annual Honolulu Festival. This year they incorporated various drumming styles. The loud shouts of the drummers and the sound of the taiko drum echoed dynamically throughout the venue, which the audience were riveted by the rhythmical beats and dynamic moves. Also, 4U, the Hawaii’s marvelous Ukulele prodigies, appeared on stage! The 4 young members were between the ages 15 to 18. Each of them holds a championship title of various contests in Honolulu. Their outstanding Ukulele techniques and musical talent amazed the audience. Their music is comparable with a famous Ukulele player Jake Shimabukuro. Great things can be expected in the future from these young boys. The Flag Wavers from Faenza from Italy joined for the first time this year. This group performed in medieval uniforms with the colors of 5 groups of flags-wavers of Faenza which are white, yellow, black, red and green. The flag bearers and musicians of Faenza are among the most talented in Italy. In fact, they have been awarded with over 30 titles of Italian Champions from the ancient flag games. The audience cheered as flag wavers start swishing their flags and tossed them up high. The performance is not only limited to music and dance. The BestBody International in Honolulu gained much attention. This group was established to fill the world with smiles by promoting a healthy living, which includes both emotional and physical aspects. It believes that the health is one of contributing factors for world peace. The performers displayed their muscular bodies to the crowds. Some of the local participants especially received warm cheers. D.D.M Company from Aichi Prefecture and Tokyo Visual Arts excited the audience with their speedy yet dynamic jazz and street dance. Furthermore, traditional dances from different cultures in the world created an unique atmosphere.

One of the groups, Jaran Aboriginal and Torres Strait Islander Dance Company promote their Australian Aboriginal culture through dancing. Their dance portrayed the theme of life from birth to death. The audience watched silently with intrigued looks on their faces as the Japanese ancient performing arts, “Ningyo-Jyoruri” or Japanese Puppet Theater was performed by Awakogeiza. In addition, the audience grooved along with the Japanese traditional art, “Nankin-Tamasudare” which is a street performance that transforms a special bamboo screen into various shapes accompanied by the rhythmic chant. Also, the“Ryukyu Daiko” or the Okinawan drum excited the audience by its powerful performance. It was memorable when the audience started to dance naturally to the rhythm. There was an instant bond between the performers and the audience from different countries. Certainly, it is safe to say that this event made a step toward world peace. 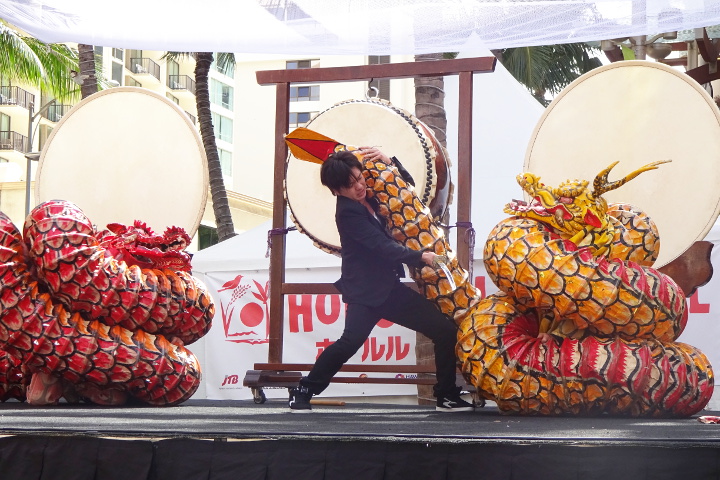 Furthermore, the beautiful voice of performers resonated throughout the venue. It ranged from a mellow and sexy adult’s voice to a young innocent voice. The passers-by were intrigued and stopped to watch the performance at the Ala Moana Center and Waikiki Beach Walk.

Sakuran performed various types of dances including traditional Japanese dance called “reizinden” which the dancers will be dancing with a dragon. They were accompanied by traditional Japanese instruments such as taiko drum and shamisen. Also, the cherry blossom petals were scattered all over the stage which represent the symbol of Sakuran. Also, the members of Takarazuka Sports Baton Club were satisfied after their performance, which the smiles spread toward the audience.

It is true that all the participating groups made tremendous efforts to prepare for the Stage Performance.