The students of Sonada Gakuen High School, which is located in the city of Amagasaki in Hyogo Prefecture stayed in Hawaii for 5 days and 4 nights. They participated in the Grand Parade on Sunday, March 16. This year was their 3rd time to participate in the parade. The students didn’t travel just for sightseeing, but rather they interacted with people in Hawaii and made them happy with their powerful performance which was inspiring as well.

Let’s take a look at what they’ve done during their school excursion.

5 sophomore classes consisting of 159 students including teachers arrived to Honolulu in the morning Friday, March 14. They ate at Planet Hollywood which is located near Waikiki Beach Walk (one of the venues used for the Honolulu Festival). Afterwards, they went to Diamond Head for a hike! There were many students that visited Hawaii for the first time which they looked excited with anticipation.

Next day, the students practiced dancing for the parade at Kapiolani Park from 7:30 in the morning. They were looking toward Waikiki beach and practicing hard while the sun shined on them. They were making sure for the last time to see if they haven’t forgotten their moves that they’ve learned. After breakfast, the students were divided into 3 groups and enjoyed Hawaii. One of the groups went to the beach and another group went shopping to the Ala Moana Shopping Center. Also the other group went to play tennis. The practiced dancing for the last time while they were bathing in the sun.

Great Excitement at the Friendship Gala

The students participated at the Friendship Gala in the evening at 7. They looked very satisfied since this is an event where you can enjoy fine dishes prepared by the top notch chefs in Hawaii. The most popular was the “Sesame Peanut Butter Crunch with Homemade Jelly” from The Pineapple Room prepared by the Chef Alan Wong.

The Best Contribution Award was also held at the Friendship Gala. This is an awarding ceremony to honor the participating groups. Also, the group of Sonoda Gakuen was given the award from the President of the Honolulu Festival Foundation, since they participated in the festival for 3 consecutive years.

Furthermore, there was a great excitement during the finale. This year, the group of Tonosama Ren performed their Awa-Odori at last. The students went up on stage and enjoyed dancing with everybody. The Best Contribution Award was given by Mr. Sugi, the President of the Honolulu Festival Foundation. We are performing for those people who came to see our dance!

Before the parade, the teacher said “I know that you guys will be exhausted and tired during the parade but we should keep smiling and do our best since there are many who came to see the show!” The students took his advice and danced cheerfully until the end. Eventually, the spectators along the roadside of Kalakaua Avenue were smiling and giving a round of applause. We felt that the commitment of the students of Sonoda Gakuen allows many people to be inspired every year. 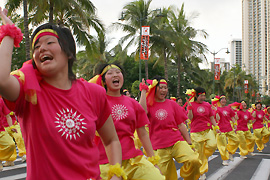 There was an audio problem during the performance but the students were able to cover it up by singing. 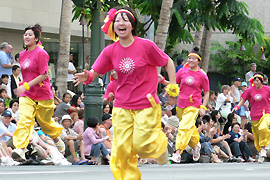 Those cheers from the spectators made the students happy.

Moved to smiles and tears!

All of sudden, the rain started to fall when the students were about to reach the ending point. After the performance, the sweats and tears made a mess on their matched costumes as well as on their face. In addition, the students and teachers were in floods of tears.

Furthermore the students felt a sense of accomplishment since they practiced dancing for the past 5 months. Also, the parade reached its climax by the warm cheers from the spectators.

Also, the students from 5 classes brought an excitement. Each moment seemed like they were having an unforgettable experience.

Moreover, the students were still excited even during the group photo. They all left their fantastic smiles in Hawaii with the sunset behind them. 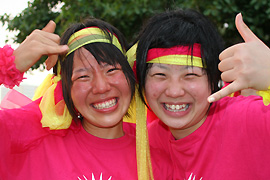 The students left their fantastic smiles and tears in Hawaii. The students were feeling a sense of accomplishment! The students and teahers couldn’t stop the tears. The students were full of smiles. They took a group photo with the sunset behind them.

Interview with the students

Jack, who was watching the practice session

Elizabeth, one of the spectators

We interview Mr. Rai, who is the Vice Principal of Sonoda Gakuen High School and also the head of the dance club.

Mr. Hayashi and the parade interview

■How was your experience at the Honolulu Festival?

This is my second year to participate as the head of our dance club. There were lots of exciting moments last year. The students are proud and happy that there are people who are warmly watching their performance in the parade. Even after their return to Japan, they were still talking that the Honolulu Festival was amazing.

■There are various school excursions, but why did you guys chose the Honolulu Festival?

Up until 3 years ago, our school excursion was a ski trip to Hokkaido. However, it is becoming a mainstream to go on a trip within Japan during junior high and traveling abroad during high school. Hence, we were pondering on what country to visit for our school excursion. At the same time, we discussed that sightseeing is not enough to be considered as education. Then, we heard about the Honolulu Festival around the same time. We thought that the Honolulu Festival is an ideal place where the students can present what they’ve learned and express themselves, so we chose Hawaii as our destination. We believe that this is a great place where the students can be inspired, so we will continue to participate in the festival. Also, when the students move into senior year, they have to focus on their future career. Therefore, it is very significant for them to go on a school excursion during the junior year.

Normally, the students won’t go outside of school so they tend to be introverted. On the other hand, they will become extroverted in Hawaii, where they are communicating with a stranger when they are walking on the street. Also, the students can build their confidence by interacting with people from around the world in a cosmopolitan city like Honolulu. We believe that this experience can be useful in the future. In addition, the students can feel that they are capable of inspiring others in a place where they can present what they’ve learned and practiced in school.

■Are you planning to participate in the Honolulu Festival again in the future?

Yes, we think that seniors can inspire juniors by participating in the festival which is becoming like a tradition in our school. On Sports Day, our students who went to last year’s school excursion presented the dance that they’ve performed at the festival in front of all students and some guardians. Those students who watched the performance said that it was a wonderful dance.

We believe that it is very meaningful experience for the students to show their daily progress in a place where there are people from various countries.