The Educational School Tour was held on Friday, March 14, which is an annual educational program for the schools of Oahu. This year, students and their guardians as well as the teachers from each school participated in this event. There were 71 students from Wilson Elementary School, 7 students from charter school and 51 students from the Lutheran High School of Hawaii. In addition, there were 27 students from St Ann’s Model Schools. The students enjoyed and learned about the cultures of countries of the Asia-Pacific region by actually participating in touching, watching and listening to them. The participating group for the Educational School Tour included Suginami Karutakai and Eco Cloth Zouri Circle from Japan, Descendance from Australia, Nantou County Formosan Aboriginal Culture Village from Taiwan, Honolulu Daijayama and staffs of the Japanese Culture Center of Hawai’i. The students were divided into small groups and experienced various traditional cultures and dances of Japan, Australia, Taiwan and Philippines. There was a competition of Japanese Karuta offered by Suginami Karutakai. The students were explained about the rules of the game by the members. Those Karuta cards were written in Roman alphabet, so that the students can comprehend them. The scene where the players were surrounding the cards and searching fanatically for the matching cards is universal. It looked difficult to organize those children that were new to playing the game, but they were still enthusiastic about it which the members of Suginami Karutakai were very please. The cloth zori (Japanese sandals) made by the members of Eco Cloth Zouri was very rare, which the teacher seemed more intrigued than the students and rechecked its procedure then commented, “It is better to use two ropes and used T-shirts.” One of the students weaved it too much that the width of their zori became narrow. Also, some of the students were instructed that the width will be narrowed if they weaved it too much. The majority of people in Hawaii wear flip flops on daily basis. Hence, they were familiar with zori and also they were very interested in making them. Also, Descendance from Australia performed the Australian Aboriginal dance in front of the students. Those students were captivated and watched the unique movement matched with the sound of didgeridoo. Furthermore, they cheerfully raised their hands when they were called to participate in dancing with the performers. They also received the unique Aboriginal face painting and challenged their best to play a didgeridoo, which is difficult to create its sound. In addition, the students danced the fish dance as well as the kangaroo dance with the members of Descendance. They had such a valuable experience through this event. Moreover, the members of Nantou County Formosan Aboriginal Culture Village from Taiwan performed the dance of Taiwanese Aborigines as well. They also taught Taiwan’s traditional game to the students, which it requires a player to use a spear and a wicker ball. Everybody held their hands and danced together at last. In addition, the teachers and guardians were dancing happily as if they went back to their childhood.

Also, CSU Pannnadamman Dance Troupe participated from Philippines. The students experienced “tinikling” which is a traditional Philippine folk dance, where the dancer will be stepping over and in-between the two bamboo poles not to get caught by them, which is difficult and requires skill. During the performance, the dancers looked serious, but they looked relaxed after it was over. 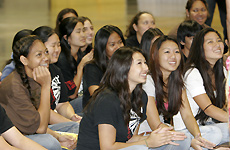 In addition, there were exhibitions of mikoshi (portable shrine) and Omuta Daijayama. The students learned about the Japanese festival while observing those displays. They also had a virtual experience of carrying the mikoshi by holding its poles and shouting “Wasshoi! Wasshoi!” And they experienced making their original hachimaki (Japanese headband) by putting stamps on a piece of cloth. Moreover, the students learn about the culture of the Japanese festival as well.

The students have seen and heard a lot of new things through this event and their eyes were shining with curiosity. Also, their teachers and guardians were impressed about this educational program because students can experience and learn various cultures.

We interviewed a teacher from St. Ann’s Model School, who participated for the first time at the Educational School Tour:

“One of our students is from Nigeria, which the students became interested in learning different cultures. Hence, we decided to participate in this educational program hoping that we can experience many of them. Indeed the students were having a great experience today.”