The Stage Performance was held at 4 locations in Waikiki. The performers performed on respective stages and entertained many audiences. There were powerful and relaxing shows where the audiences can also participate in some of them. Also, you can watch the performances that you’ve missed from the previous festival.

We are looking forward to seeing the performers for next year! 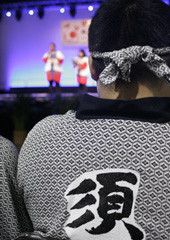 Every year, the Hawaii Convention Center which has the largest stage will be used for the Stage Performance in Ala Moana. It is where you can sit back and enjoy each performance, which there were many elderly visitors.

Sugaizanairen was the first group that performed on the first day, which is one of the popular groups at the Honolulu Festival. We were overwhelmed by their energy which also felt unique.

The members of Kusajiodori Hozonkai performed the traditional dance of Oita Prefecture. Also, the members of Gakugeisha from Tokyo offered a koto performance with a purpose of “Enjoying and spreading arts beyond Japanese and Western music”. Mr. and Mrs. Halvoren from Canada were reminiscing about their past, recalling their last 3 visit to Japan while they were watching these performances.

Eri Mauro, who has lived in Hawaii for a year said that she is happy that she’s able to watch the Japanese festivals from various places of Japan, even though she is not in Japan. She was enjoying with her mother, who came to visit from Japan. Eri came to the Honolulu Festival last year as well, which she said that the festival is growing bigger.

During those 2 days on Saturday, March 15 and Sunday, March 16, a total of 24 groups performed at the Hawaii Convention Center. The last performance by Haruko Momoi, who came from Japan with her fans was titled “Enjoying the Honolulu Festival with Momoi”. The fans were called on stage and enjoyed dancing with Momoi which ended with excitement.

Sugaizanairen from Kochi Prefecture consecutively appears at the Honolulu Festival.

Manoa DNA from Hawaii with a hula dancer.

Hula hui O Nani Moe from Saitama Prefecture. Thank you very much for performing such a beautiful hula.

Potomac Falls High School Band from the state of Virginia.

Mr. and Mrs. Halvorsen from Canada

“Enjoying the Honolulu Festival with Momoi” by Haruko Momoi and her fans. The Ala Moana Center is the biggest shopping center in Honolulu, where it is crowded with shoppers. Also, there is a stage in the middle of the mall called the Centerstage which is used for the Stage Performance. One of the attractive features of this venue is that the distance between performers and audience is close. In addition, some of the performers may utilize the space and perform off the stage.

This year, Jojima Ryujindaiko from Fukuoka Prefecture participated for the first time at the Honolulu Festival. Their sound of taiko drumming resonated throughout the venue which attracted many people. The vibration from the sound made our body shake and its powerful performance went beyond the border which the audiences looked impressed. In addition, Jojima Ryujindaiko performed overseas for the first time at the Honolulu Festival. They were pleased and said that they had such a stimulus experience because they don’t have opportunities to perform on the stage in Japan.

Furthermore, Ritsumeikan University dig up treasure from Kyoto is the first Double Dutch team at the Honolulu Festival. Their mission is to spread Double Dutch outside of Japan. The members were spinning 2 jumping ropes in a skillful manner a long with dance music, while the others were performing a funky dance and jumping those ropes. Every time they were successful in showing their jumping techniques, the audiences gave a big round of applause and cheers. Tomoko, who is one of the members said, “I’m satisfied because we were able to perform better than yesterday! All can say is that I enjoyed very much!!” Also, Kanily who came to visit Hawaii from the state of Arizona for her spring break said, “This is the first time watching it. It was so energetic and their formation was cool! I want to watch it again!”

The unique feature of the Honolulu Festival is that there are many performers not just from Japan but from all over the world. The members of Chum Sa Rang performed Korean traditional dance. Their light colored costume made with a thin cloth swayed as they danced such a graceful and beautiful folk dance. In contrast, there was a passionate and powerful Korean drumming performance as well. The other performances included hula, aerobics, marching band and many more.

Jojima Ryujindaiko from Fukuoka Prefecture. The sound of their taiko drums attracted many audiences.

The members of Ritsumeikan University dig up treasure performed such an amazing Double Dutch.

You can feel the sweat and heat from the performers as you’re watching their performance in front of your eyes.

The costumes and music of Korean folk dance are unique.

The audience participated on the stage and enjoyed with the performers at the Ala Moana Center as well.

Hula Halau Luana & Ikala from Osaka. Their white and red dresses were beautiful on stage. 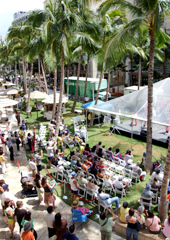 The stage was set up at Waikiki Beach Walk, which is located next to the Royal Hawaiian Shopping Center in Waikiki. The performances were held under the blue sky blown by a fresh breeze, which gave a relaxing resort vibe of Hawaii.

Among the audience, there were families that were returning home from the beach as well as the tourists that were shopping.

There were more performances compared to last year including hula, creative dance and taishōgoto (Nagoya harp) from Japan. Also, there were participating groups from various countries including Philippines, Australia and others.

The taishōgoto was played by Kinmeiryu FMC Toyama which consisted of 18 members. Most of them were first time to visit Hawaii. They decided to join the festival just 3 months ago, which they didn’t have much time to practice. However, one of the members said, “We are very relieved that our performance ended in great success.”

Furthermore, Descendance from Australia attracted the audiences. This is a veteran group of Aboriginal Australians, which they also performed at the Sydney Olympics. Every year, they are participating at the Honolulu Festival as well.The dancer’s face and body were painted with distinctive patterns. They were dancing to a thick rhythm which looked very strong and unique. At last, some of the audiences got together on stage and danced with Descendance.

The audiences were dancing the Aboriginal Australian dance with the dancers of Descendance from Australia.

The audience is taking pictures with one of the members of Tonosama ren, which is a group that performed Awa-Odori and brought excitement to Waikiki Beach Walk. This is a proof of goodwill. 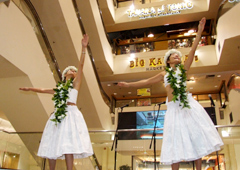 This year, a new stage was set up at the Waikiki Shopping Plaza located in the near middle of Waikiki. The size was small, yet there were many audiences. The distance between the stage and seats were just few meters away, so the audiences may even feel the breathing of performers.

Zendoji Yamabiko Daiko is a youthful group from Fukuoka Prefecture consisted of young members under the age of 20. The members got the day off from school, which they were ready to perform. Also, all of the songs were composed by the group which we were able to feel their passion from listening to each one of them. It was memorable to see the performing members genuinely enjoying in which we received lots of power. The local children were attracted by the powerful sound of taiko drums and they participated in the middle of the performance. Afterwards, they requested to take pictures with the performers, which Zendoji Yamabiko Daiko was very popular.

The Wakiki Shopping Plaza is an amazing place, where the audiences and performers can be as one to smile and interact with one another.

It is such a pleasant scene to see the audience enjoying and challenging to play the taiko drum.

You can feel the spirit from the karate performance by Samurai SPIRITS Furinkazan Karate-do.

The spirit of Japan was present in the performance of Tsugarushamisen “SHIHOUKAI” Kokusai Koryu.

We were able to feel the Aloha spirit from the members of Poniohe Kaya Hula Studio which they participated from Kyoto.