The “Share Your Voice Project” is an educational collaborative project between the Honolulu Festival Foundation and Kapiolani Community College. This project was launched for the next generation to gain various experiences through interactions between the students from the Japanese language class offered at Kapiolani Community College and people from countries of Asia-Pacific region such as Japan to learn their cultures.

Also, this is a great opportunity for all the students to learn about the passion and ambition of each performer through interactions. In addition, the students promoted the Honolulu Festival by live streaming the scenes of the festival online. 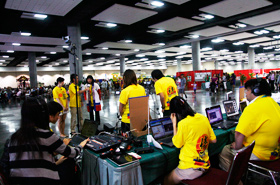 Each student was responsible for their own given tasks. 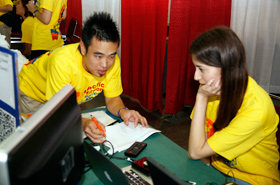 It is important to be supportive of your teammates and work as a team.

A total of 32 students participated this year. They were live-streaming various performances and interviews for 3-days from Friday, March 2 through Sunday, March 4, at the Hawaii Convention Center. Those live streamed videos and interviews were conducted in Japanese and English.

Furthermore, each student was given their position whether as an interviewer, cameraman or sound man. Among those interviewed were various performers, vendors of the Craft Fair, exhibitors and the visitors. In addition, there were students that were in charge of managing social media such as Facebook and Twitter. Everybody played their role very well.

In fact, there were many students that didn’t know about the Honolulu Festival, which they’ve learned that it serves as a place for cultural exchange as they interviewed people from various countries.

Moreover, most of the students said that they were impressed by the performers who were passionate about spreading the word of their culture. Some of the students from Japan said “I’ve learned many things about Japan that I didn’t know of. I would like to spread the word about my culture as being Japanese”. Also there was a student that said ” I felt the cultural exchange can be achieved even with language barrier by sharing a joy with one another”.

We would like to embrace and foster the relationships with the local communities and schools. By the same token, we would like to offer a place of cultural exchange for a lot of young generation to interact with people around the world. Alaska Native Heritage Center Dancers were interviewed after their performance. The band members of Kalani High School that participated in the Band and Orchestra Festival were interviewed. The students interviewed a boy who tried the goldfish scooping for the first time. The students interviewed by the booth of Made in Hawaii Cookies. The interview was conducted at the Cosplay Cafe. Each student had successfully demonstrated their own talent and skills.

Channel-1 Channel-2
Back to TOP