The Friendship Gala began with the opening performance by Dai Hirai, which the guests were welcomed by his song.

This is a place where the popular local restaurants of Hawaii gather and offer various gourmets, which the guests can enjoy and interact with the participating groups of our Honolulu Festival.

There were many dishes that incorporated local foods of Hawaii including salad, meat, fish and dessert, which the guests were enjoying the dishes as if it is a full course meal. They tasted delicious which satisfied everybody. The Hibachi Steak offered by the Prince Court Restaurant is marinated with coconut from Molokai. The picture above is a strawberry sponge cake by the Honolulu Coffee Company. They also offered coffee jelly and macaroon. 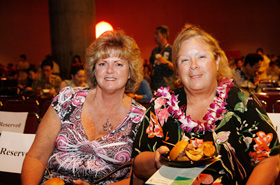 The guests claimed “delicious” as they enjoyed their dishes in the front row. 3660 On the Rise is one of the popular restaurants that won various awards. Not to mention, Nanzan Giro Giro participated for the first time.

The Chinese lion dance was performed to celebrate the year of the Dragon. It is one of the Chinese traditions to bring a good fortune. Their vigorous energy was spread throughout the venue as the dragon danced on stage.

Speaking of the celebrations, the city of Honolulu and Nagaoka City has officially signed a sister-city agreement this year. Also, the Nagaoka Fireworks will be held once again. The big barrels of sake from Nagaoka City were brought to celebrate “Kagami Biraki” which is a Japanese traditional opening ceremony. They were broken up by a wooden mallet, which the guests from all around the world were able to witness such a traditional practice of Japan. The dragon performed lively as if it is really alive. The dragon moved swiftly on the stage. “Kagami Biraki” was held to celebrate the successful opening of the Honolulu Festival and the harmonious relation between the city of Honolulu and Nagaoka City. After the ceremony, the sake was offered.

Furthermore, Kumiko Yamada who is a Japanese entertainer performed her song on stage which was followed by the dancing performance of Sonoda Gakuen High School. In addition, Manoa DNA played Hawaiian music and also Sugaizanairen performed the yosakoi dance.

Kuniko Yamada is also a member of the “Star Mixed Chorus” which is a chorus group that supports cancer patients and their families. She shared her own experience and tribulation with breast cancer. Also, she sang A Joyful Blue Bird which is a song that she has written. Her kind words created a family-like atmosphere which some of the guests were in tears.

Sonoda Gakuen High School couldn’t attend last year due to the Great East Japan Earthquake yet, the students performed lively this year. Most of the audience commented “their dance gives me energy”.

Moana DNA played their Hawaiian music with a beautiful sound of guitar, accompanied by a hula dance by Sarah Kamalei, who was invited as a special guest. They performed a song called Aloha You ~Kizuna~ which goes “everybody is bonded, everybody is a family”. After the show, a big round of applause was given which filled the venue with a warm atmosphere. One of the audience offered a hand shake while Kuniko Yamada was performing her song. The vibrant stage performance was brought by the students of Sonoda Gakuen High School. Hawaiian music performed by Manoa DNA was harmonious, which reminded of the scenery of Hawaii. The last performance was given by Sugaizanairen. The founder Suga Kunitomo had passed away on June of 2011. She was the one who always shouted “ARIGATO GOZAIMASU! (THANK YOU!)” in a bold, cheerful voice on stage. Unfortunately, her presence was absent this year. In addition, Sugaizanairen is a group that has been participating in the Honolulu Festival from the first to the present. It was their will to join every year which Suga Kunitomo participated during her short remaining life.

They performed the powerful yosakoi dance with a message of “making a better world”. The adults and the children were enjoying  with a chant of “yosakoi! yosakoi!”. We hope that the people of the world will be united as one for world peace. On the right is Suga Kunitomo, who participated last year. Yuichiro Kunitomo who became the new leader of Sugaizanairen shared his story of Suga Kunitomo. The yosakoi dance became drastic with intense beats when all the performers simultaneously threw their bamboo hats in the air and changed their costumes. Everybody was united and enjoyed the yosakoi dance.