The Stage Performance was held at the Hawaii Convention Center and Waikiki Beach Walk on Saturday, March 2, 2013. Also, the 3rd stage was set-up at the DFS Galleria on the following day. On the other hand, the Centerstage of the Ala Moana Center was closed due to renovation.

There were various participating groups from the countries of the Asia-Pacific region such as Australia, Taiwan, Korea and Japan. In addition, the number of young performers has increased, since the schools have joined the Honolulu Festival as part of their curriculum. Aside from the actual performance, the students were exposed to intercultural experience which was a great opportunity for them. Above are the members of the Taipei National University of the Arts. 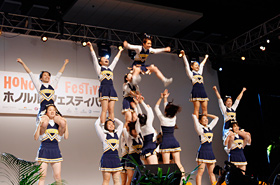 Above is the Cheerleading Team Phoenix from Osaka Gakuin University. Above are the members of Ritsumeikan University dig up treasure. The seats were filled quickly this year.

Also, the indigenous people of Japan called the Ainu from Hokkaido performed a traditional Ainu dance. The dance itself was recognized by UNESCO Intangible Cultural Heritage. In addition, their dance told a story of a man who is in a dilemma on whether to shoot the beautiful bird with his bow and arrow. It depicted the life of Ainu people, where they respected the nature and peacefully coexisted with one another. The didgeridoo developed by the Aboriginal Australians is one of the oldest woodwind instruments in the world. Above is the folk dance of the Torres Strait Islands. The Ainu people living with appreciation by coexisting with the nature and praying to their gods.

This is an event that can make you feel like you have traveled to various countries. Furthermore, the audience gave a generous applause to those performers who practiced diligently. There were impressed by the traditional arts of each country and mesmerized by the passionate performances. This performer was dripping with sweat and breathing heavily as he danced with his hands. Their daily practice allowed them to perform successfully with composure. “Honu By the Sea”, a musical that is been played in Waikiki performed a short version of their play. Sugo lion is recognized as one of the Important Intangible Folk Cultural Properties of Japan. It performs acrobatic tricks. The vibrant performance by Sugaizanairen always gives inspiration and comfort. The venue was filled with cheers and smiles.