The Friendship Gala was held on March 6, 2015, on the first night of the Honolulu Festival at the Hawaii Convention Center. The guests were queuing in front of the venue around 18:40 even though the opening was scheduled at 19:00. All the participants entered into the venue around the same time, where it was very crowded and lively. 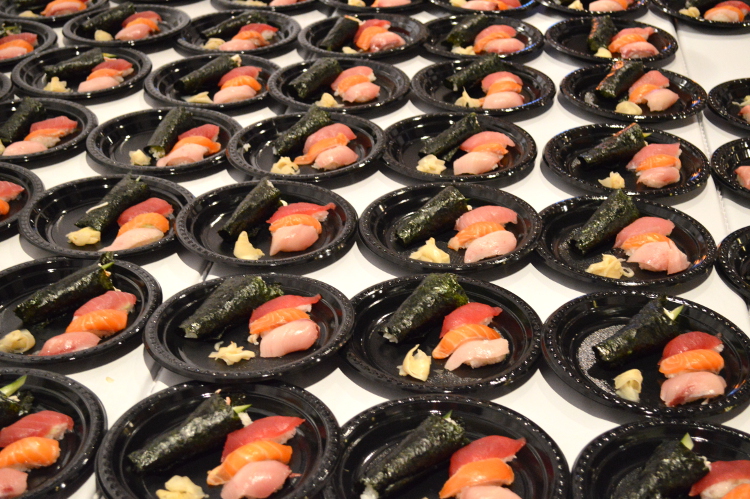 There were 5 fancy local restaurants proudly preparing and serving the dishes.

Each restaurant was supported by our volunteers. This year was the first time for the sushi restaurant Yatai Sushi to participate in the Friendship Gala. It serves fresh and delicious sushi which was very popular that the guests made a long queue. While the guests enjoying their luxurious dishes, The University of Hawaii March Band performed for the opening party. They excited the audience with their smooth movements and steady formations along with the rhythmic sounds. Mr. Harufuku greeted everybody during the formal opening. Also, the governor of Hawaii, David Ige gave a congratulatory speech as one of the invited guests of our festival. Followed by the formal opening was the stage performance by the ukulele players, Honoka and Azita from the talented group, Ukulele Super Kids that won the Hawaii Junior Ukulele Competition. They played impressively with a vibrant sound which unexpectedly amazed the audience since the performers were still young and small. Next was the singing performance by the famous Hawaii female singer, Raiatea Helm. Her beautiful voice and melody warmly surrounded the entire venue. The special dancing team Un Bijou performed a fascinating dance on the stage which brought a unique atmosphere . The other students from Sonoda Gakuen High School have gathered to show their support by cheering loudly while the team was flying and jumping on the stage. The vigorous performance and the youthful energy of the dancers brought an excitement that they could not take their eyes off the stage. The hula dance was also performed in a pleasant groove. The guests seemed to be enjoying various performances. Finally, everybody was invited on the stage to dance with others for the finale. At the end of the day, everyone left the venue with a smile of satisfaction.

The purpose of the Friendship Gala is to build friendship and to promote international goodwill between the people in Hawaii and the people in Asia Pacific region. The participants may learn unique cultures of different regions through dance, music and food in the Honolulu Festival.