More than 100 vendors exhibiting from around the world Including Hawaii and Japan. Ennichi corner will feature many activities for the young and young at heart.

*All the event schedules are subject to change without notice. The Maui mikoshi contest was developed exclusively for high school students in Maui. Each year there is a competition among high schools to design a mikoshi for the Honolulu Festival. The winning Maui mikoshi is displayed at the Hawaii Convention Center over the Festival weekend.

Come and enjoy dance, music and traditional arts performed by groups from Hawaii, Japan and other parts of the Pacific region.

*Show ends at different times depending on the venue.
*Performance schedule is subject to change without notice. *For about 30 minutes each dance. 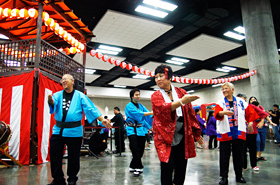 Dance teams from Japan and Hawaii unite! The goal for this new event is to continue to provide a place in Hawaii to promote cultural exchange and inspiration through dance.
(The 2023 dance event will not be in a competition format, but as an opportunity to perform on a large stage and interact with other participants)
*Free Entrance!! A special mini-live will be held to commemorate Hitomi Shimatani’s appointment as the 27th Honolulu Festival Official Ambassador. Since her debut in July 1999, Shimatani, a talented Japanese singer from Hiroshima, Japan, has been well received for her ability to sing various types of songs that transcend genres with her beautifully clear vocals. She has received

numerous awards including the Newcomer of the Year Award. In addition to her musical activities, she has appeared on many radio programs and TV shows in Japan.

For social contributions, “YUME Biyori” was selected as the theme song for the LGBT events in 2018. After the Great East Japan Earthquake, her charity song “Shiawase wo hakoberu youni” was released, which was sung together with 77 children from the Tohoku and the Great Hanshin-Awaji Earthquake areas. Her SDGs support song “CYCLE” was also released, as she performed at charity concerts.